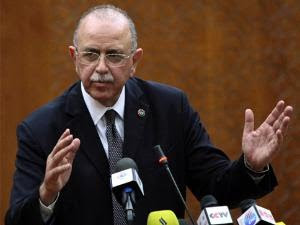 Tripoli, Libya (CNN) -- Libya's transitional government picked an engineering professor and longtime exile as its acting prime minister Monday, with the new leader pledging to respect human rights and international law.
The National Transitional Council elected Abdurrahim El-Keib, an electrical engineer who has held teaching posts at the University of Alabama and Abu Dhabi's Petroleum Institute, to the post with the support of 26 of the 51 members who voted. El-Keib emerged victorious from a field that initially included 10 candidates.
"This is a new Libya," El-Keib told reporters. "It's been 42 years with our friends and people all around the world dealing with a brutal dictator, so concerns are in order, but I want to tell you there should be none of those.
"We expect the world to understand that we have national interests as well, and we expect them to respect this," he said. "In fact, we demand respect of our national rights and national interests. In return, we promise respect and dealing according to international law."
But in response to questions about allegations of human rights abuses by the revolutionary forces that toppled longtime strongman Moammar GGadhafi, El-Keib said Libyans needed time to sort things out.
"I also need to remind myself that the Libyan revolution ended just recently in Bani Walid, Sirte, and in Tripoli only about two months ago," he said. "We beg you , the media, to give us the opportunity and the time to think through all the issues that have been raised by yourself as well as other Arab media. But we guarantee you that we are after building a nation that respects human rights and that does not permit abuse of human rights, but we need time."
El-Keib, an NTC member representing Tripoli, has been a member of the Libyan opposition. He is to hold the prime minister's job while Libya writes a constitution and prepares for a national election to vote in a new government, and said he plans to meet a deadline to form a new government within a month of the October 23 declaration of liberation that followed Gadhafi's killing.
It was not immediately clear when he returned to Libya from the United States, where he had lived since 1975. According to his university bios, he earned his bachelor's degree at the University of Tripoli in 1973, a master's at the University of Southern California in 1976 at a Ph.D. at North Carolina State in 1984.
He joined the Alabama faculty in 1985 as an assistant professor and became a full professor in 1996, teaching in the university's electrical and computer engineering department and serving as director of the engineering school's Energy Systems and Power Quality Center, according to a university directory.
He is currently listed as "former faculty" on the website of The Petroleum Institute, which said he served as chairman of its electrical engineering department and lists him as an expert in power system economics, planning and controls.