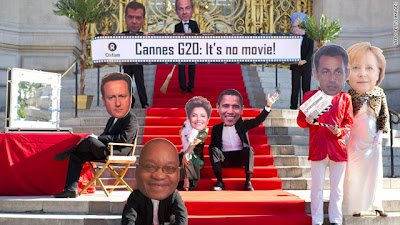 Cannes, France (CNN) - As the sun sets over the French Riviera, its capital of glitz and glamour feels more like a port in the storm than a tranquil retreat for the rich and carefree.
Cannes is a town more used to welcoming talking heads than heads of state; a place where panels pick their favorite motion picture, not monetary policy. This week though Cannes will welcome a different kind of debate.
I've known France's Tinseltown since I was a toddler and the place has always appeared impervious to economic upheaval. Through boom and bust, Cannes has carried on regardless, doing what it does best: Catering to old money and oligarchs alike.
This sun-drenched scene is a perfect setting then for emerging markets and established economies to square off when chiefs of the 20 most industrialized nations meet this week to set the agenda for the year ahead.
They are meeting as Greece's government teeters on collapse, following its PM George Papandreou's decision to call for a referendum on the country's aid package. His call has thrown Europe's grand rescue plan, revealed only last week, into disarray.
An emergency meeting is planned at Cannes Wednesday with Greek officials and German Chancellor Angela Merkel, French President Nicolas Sarkozy and senior figures from the International Monetary Fund and European Union ahead of the G-20 summit, which begins here Thursday.
The stakes couldn't be higher, with eurozone countries - like France, 2011's G-20 host - now battling to shore up confidence in a common currency which prices a quarter of the world's foreign exchange reserves.
Saving money is one thing the emerging markets have been good at of late, while their sanctimonious European partners developed a tendency to spend.
Perhaps this town knows something 'the West and the rest' doesn't: Along Cannes's seafront, large billboards proudly proclaim that this G-20 will be a place "where history being is written."
Then again, Cannes could just be drawing on the false confidence the French President is famous for.
Days after his glorious return from the EU summit in Brussels, Nicolas Sarkozy will once again take center stage.
As one of the eurozone's two self-appointed saviors, Sarkozy's first task will be to try and tap China for an enormous loan to support the eurozone.
That's easier said than done when your bigger betting partner - Germany - won't put more of their money on the table and no one else will show their cards either.
China, for its part, has made many promises to many people through the years, though it has been slow to deliver.
Gold standard guarantees will have to be offered to get China's President Hu Jintao to reach for his renminbi.
Once the first hurdle is passed, the French leader will have to reassure his colleagues that Europe won't just skirt a recession but will return to growth, despite some obvious structural imbalances that its leaders have only just begun to tackle.
Imbalances that have prompted a "lost generation" of young and unemployed to take to the streets with anti-capitalist movements, springing up from Madrid to London.
In Cannes, however, it seems authorities are taking no chance. The streets and hotels are swarming with around 12,000 police. Cars have been cleared from parking lots and those without the proper clearance pushed back miles outside the town.
Police motorbikes are patrolling the freeway exits, and the Italian /French border is closed.
Early Tuesday, the U.S. President's two giant official vehicles were carefully driven into his hotel parking lot amid tight security. As delegates began to trickle into Cannes, protesters camped out a few kilometres down the road in Nice.
Among them, 200 members of the Spanish movement 'the Indignants'. One demonstrator hailing from Catalunya – who would only call himself David - told local newspaper Nice Matin he was there to tell world leaders "if you deny us our dreams you deny us our sleep," a reference to the lack of prospects in his native land.
Last week Spain's unemployment rate touched 21.5%. Youth unemployment stands around double that amount.
Perhaps appropriately, then, the G20 will be anything but a boon for Cannes's plentiful bars and boutiques.
Gone are the tyrants and trophy wives. In their place: Diplomats and their drivers who I am informed spend considerably less.
Many stores have decided to close up shop completely to avoid the confusion, like the tobacconist on the old town's Rue du Suquet.
Owner Yves Imbert says, "Let's hope this G20 is worth it because the crisis is pretty serious." He added, "I am worried about France's future. Its influence."
The truth is France and Europe's negotiating position is far from what it once was. Once the bodyguards and helicopters have gone, France will still be a country with 9.6% unemployment; a nation whose economy didn't grow at all in the second quarter.
Posted by: CNN Anchor, Nina dos Santos
Posted by Joshua Lopez at 4:12 PM