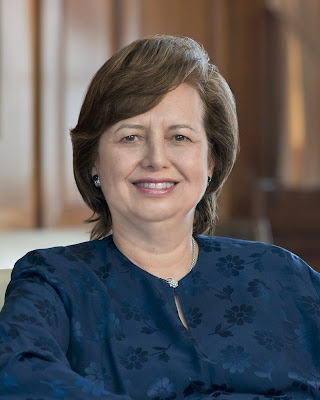 I say let's forget about Men inheriting the Premeirship, let's look at women for a change & yes we do have a highly suitable candidate and it's none other than Bank Negara Governor Tan Sri Dato'Seri Dr.Zeti Akhtar Aziz!

Tan Sri Dr Zeti Akhtar Aziz' is the 7th and current governor of Bank Negara Malaysia, Malaysia's central bank. She has been governor since May 2000, and was the first woman in the position.

1 Early life
2 Career
3 Personal life
4 References
I firmly believe that Tan Sri Dato' Seri Datin Paduka Rafidah Aziz has what it takes for Premiership but UMNO has treated her very badly and she has moved on to the Private Sector.

KUALA LUMPUR: Malaysia's next Prime Minister could be a non-Malay only if he is a "true patriot" and is able to obtain the support of the majority.

Deputy International Trade and Industry Minister Datuk Mukhriz Mahathir pointed out that although Barack Obama became the first African-American President of the United States, it would be difficult for a non-Malay to gain the support of the Malay majority.

"According to the Constitution, the PM has to be someone who enjoys the support of the majority of MPs, and 63 per cent of the population is still bumiputra," he told a Press conference yesterday.

“So, until you find a candidate from whatever ethnic background who can enjoy the support from that 63 per cent then that will be the case. You have seen it happen in the US with President Obama."

He was responding to Minister in the Prime Minister's Department Datuk Seri Nazri Aziz's interview with The Edge Financial Daily published yesterday.

“But I must say in the US despite his (Obama) rather strange un-American name, the US president went through the American system. He was schooled in an American way, no one thinks of him other than being an American leader," he said.

"I don't think he speaks Kenyan, so you don't associate him with Africa. So you see Barack Obama as a true American.

“Unless we get people who are true Malaysians and true patriots then perhaps that day will come."

Nazri's remark was not the first by an Umno leader that a non-Malay could become the Prime Minister.

In 2008, former Prime Minister Tun Dr Mahathir Mohamad said while it was possible to have a non-Malay Prime Minister, the country was not ready for a multi-racial political party.

However, recently, Dr Mahathir has backed Malay right-wing group Perkasa and warned that the Malays could lose power if Barisan Nasional did not win in the next general election.

On a separate issue, Mukhriz brushed aside calls by PKR for his father, Dr Mahathir, to be put on trial for allegedly abusing his powers and infringing on basic human rights.

He said Malaysia prospered economically under Dr Mahathir's 22-year rule and denied any transgression on human rights.
Posted by Joshua Lopez at 10:43 AM