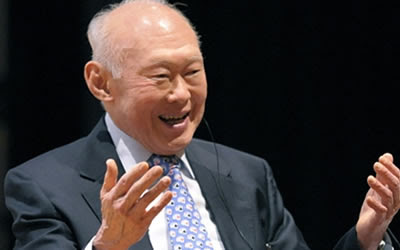 Minister Mentor Lee Kuan Yew has revealed he has no problems with having homosexuals in Parliament.

Mr Lee, however, was more ambiguous about whether same-sex marriages should be allowed, or if gays should be given rights to adopt children.

The comments were made in an interview published in his new book, MM Lee: Hard Truths To Keep Singapore Going, that was launched on Friday.

When asked about the possibility of gay Members of Parliament, Mr Lee said, “As far as I’m concerned, if she does her work as an MP, she looks after her constituents, she makes sensible speeches, she’s making a contribution, her private life is her life, that’s that.”

This, however, does not mean his personal views will become the policy of the People’s Action Party.

Mr Lee said, in the same interview, if he were the prime minster he would “hesitate to push it through” against prevailing values of society.

“You’re going against the current of the people, the underlying feeling. What’s the point of that, you know, breaking new ground and taking unnecessary risk?”

What if his grandchild is gay? Mr Lee, who believes homosexuals are born genetically different from heterosexuals, turned to the example of former United States vice-president Dick Cheney, who was against homosexuality but whose daughter is gay.

“He says, ‘I still love her, full-stop’,” noted Mr Lee. “Do you throw the daughter out? That’s life. I mean none of my children is gay, but if they were, well, that’s that.”

When it comes to same-sex marriages and gays being allowed to adopt, Mr Lee cited a “purely practical view”, noting “complications” would arise.

“Two men looking after a child? Two women looking after a child, maybe. But I’m not sure because it’s not their own child. Unless you have artificial insemination, and its their own child, then you have a certain maternal instinct immediately aroused by the process of pregnancy.”
He said, the time has not come for such a policy. “The people are not ready for it. In fact, some ministers are not ready for it.”

Political watchers and MPs told The Sunday Times Mr Lee’s views were more liberal than societal views. They do not expect the PAP government to change its basic stance. Mr Eugene Tan, a political observer, said change would not happen anytime soon but Mr Lee was “painting the larger picture” to show what is considered acceptable evolves over time.

MP Charles Chong (Pasir Ris-Punggol) agreed that MPs should be judged by their performance. PAP candidates are not asked to declare their sexual orientation, he said.

Some members of the gay community told the same paper they welcomed Mr Lee’s remarks but wished he would have talked about decriminalising Section 377A of the Penal Code, which makes sex between two men an offence.

Ms Irene Oh, 27, also disagreed that adopting a child would lessen the maternal bond. “I think adoption’s a great act of love, and there is no reason to expect adoptive patents to be any less caring.”

SINGAPORE’S Minister Mentor Lee Kuan Yew will accept the reality if any of his grandchildren is homosexual, Sin Chew Daily and Nanyang Siang Pau reported. In an interview with The Straits Times, Lee said homosexuality was a genetic issue. Sin Chew Daily, which quoted excerpts from the interview, reported Lee as saying that former US vice-president Dick Cheney was against homosexuality but he still loved his daughter even though she was a lesbian. However, Lee stressed that none of his children was a homosexual. He said that of his six grandchildren, his favourite was Li Yipeng who was born an albino.

former Prime Minister Lee Kuan Yew, and father of current PM Lee Hsien Loong, said that gay sex should be decriminalised.Gay sex in Singapore is currently classified as "an act of gross indecency" and is punishable by up to two years in prison.Lee Kuan Yew, who served as PM from 1959 to 1990, spoke at a youth rally on Saturday and suggested that the government should refrain from making moral judgements.

He said that the city state should change its approach on homosexuality, especially considering scientific evidence suggesting that it is genetic."This business of homosexuality...it raises tempers all over the world. And even in America! If in fact it is true, and I have asked doctors this, that you are genetically born a homosexual because that's the nature of the genetic random transmission of genes, you can't help it, he said according to The Straits Times."So why should we criminalise it?? Kuan Yew asked."