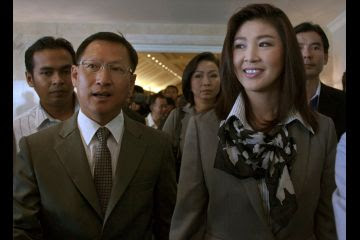 Chart Thai Pattana, Chart Pattana Pheupandink, Palangchon and Mahachon will join with the Phea Thai party to hold 299 out of 500 seats in parliament's lower house.

Yingluck, the sister of self-exiled former leader Thaksin Shinawatra, said her priority was national reconciliation. Last year 90 people were killed in violent unrest that has been ongoing since a military coup ousted Thaksin in 2006.

Yingluck also said the government would look to restore the economy, rebuild morale, stamp out corruption and assure the public that all political parties are subject to scrutiny, the Bangkok Post reported.

"I have talked to military leaders. We will allow politicians to work it out. The military will not get involved," he said.

Yingluck's Phea Thai party was masterminded by Thaksin from Dubai, where he lives, but the former premier told reporters outside his residence on Monday that he did not wish to return to politics.

“I don't want to be prime minister. I've been with the party too long. I want to retire,” Thaksin said. “Going back home is not a major concern. It is not a priority.”
Posted by Joshua Lopez at 11:25 AM