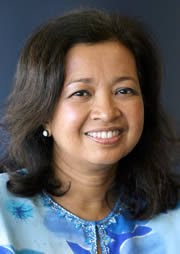 Social activist Datin Paduka Marina Mahathir today took a swipe at Bersih 2.0 chief S Ambiga’s detractors, saying that personal attacks against the latter only show their immaturity.
Marina ( right ), the daughter of former prime minister Dr Mahathir Mohamad, said the many attacks against Ambiga were shocking as it appeared as if Bersih 2.0's opponents are incapable of holding a proper debate.
“I am very concerned and upset over the personal attacks on Ambiga. It speaks of those who are against Bersih, (and) how shallow their arguments (are).
“This reflects badly on how they’re brought up,” she said at a press conference today.
Marina avoided naming individuals in her scathing rebuke, though among the most recent attacks on Ambiga’s character came from Prime Minister Najib Abdul Razak and Election Commission deputy chief Wan Ahmad Wan Omar.
Najib last weekend accused Ambiga of plotting to sabotage the BN-led government’s efforts to peacefully build the nation and its economy, saying she aims “to ruin all this”.
Wan Ahmad meanwhile called Ambiga a Pakatan Rakyat stooge who is merely being used to further the opposition coalition’s ambitions of power.
Marina stressed that instead of demonising and calling people names, it would be more productive to focus on the facts and issues surrounding Bersih 2.0 and its demands. ‘What’s to be afraid of T-shirts?’
Marina also slammed the on-going crackdown on supporters of the movement calling for free and fair elections, saying it is an act done out of fear.
“Only people who are afraid will arrest people wearing T-shirts. Ask the people, if they see Bersih on a shirt, will it make them want to riot?
“There have been worse words written on T-shirts, but none of it has made us smoke ganja or do all sorts of things... If we are really afraid of words, then we are really third world or less,” she said.
Marina questioned why the authorities insist on benchmarking the country’s civil society movement with third world countries, when Malaysia brands itself as being closer to the level of developed countries.
“Our standards should be higher... We should have more faith in ourselves, in our people,” she said.
She however refused to compare the ongoing crackdown with the controversial Ops Lalang launched during her father’s tenure as premier, when nearly 200 dissenters were arrested under the draconian internal security act (ISA).
She insisted that it is unfair to draw parallels between the two, briefly pointing out that the circumstances are different.
“Were people arrested for T-shirts (during Ops Lalang )? No? There you have it,” she said, declining to speak further on the issue.
Posted by Joshua Lopez at 2:10 PM