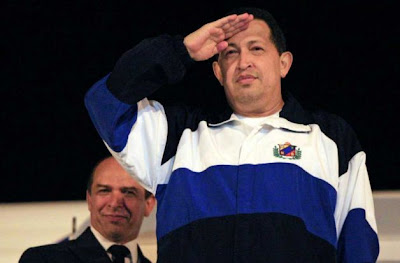 Venezuelan President Hugo Chavez has addressed thousands of supporters in the capital, Caracas, following his return from medical treatment in Cuba.
They cheered as he waved the Venezuelan flag from his palace's balcony and said he would win his health battle. Mr Chavez, 56, had been in Cuba since 8 June, where he underwent an operation to remove a cancerous tumour.
He said however he would not be able to take part in national independence celebrations on Tuesday. He said he would not attend the parade but would follow it from the presidential palace.
Dressed in his trademark green military fatigues and red beret, Mr Chavez initially led the exultant crowd in a robust rendition of Venezuela's national anthem, Gloria al Bravo Pueblo (Glory to the Brave People).
"The return has begun," he said, thanking the people for their support. "This is the best medicine for whatever illness."Speculation calmed Standing unaided, Mr Chavez spoke without notes for around 30 minutes.
At one point he held up a crucifix, saying: "Christ is with us!" The thousands-strong crowd, bedecked in the red of his ruling Socialist party, chanted back:"Oh, no! Chavez won't go!" Earlier, Mr Chavez said he had spent "very difficult days" in Cuba but that his recovery was going well.
Mr Chavez, who has led Venezuela for 12 years and survived a coup attempt in 2002, told state TV he was under very strict medical supervision "with medication, rest, meals controlled".
There had been widespread speculation about Mr Chavez's health after he left Venezuela more than three weeks ago for what officials said was an operation on a pelvic abscess.
Last week he revealed he had also had surgery to remove a cancerous tumour. He said he was determined to win his health battle and was on the road to recovery.
Political observers speculated that he could be gone for months, and some questioned whether he could realistically return to office.
Although his return has calmed much speculation, correspondents say it is still unclear how serious Mr Chavez's condition is or if he will need continued treatment that will leave him weak. Mr Chavez's extended stay in Cuba led to the postponement of a regional summit scheduled to begin on Tuesday.
Posted by Joshua Lopez at 3:46 PM