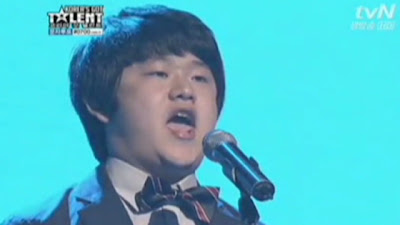 Truely A God Given Talent. I Pray & Wish Him Only The Best! He Is A STAR!

Seoul, South Korea (CNN) -- Move over Susan Boyle. Sung-bong Choi is the next global talent show sensation.
The 22-year-old has become an Internet sensation after his appearance on "Korea's Got Talent" with well over 10 million people so far watching him on YouTube.

His powerful baritone voice sounds as if it belongs to a man twice his age and build, but it is not just his singing that reduced the presenters and much of the audience to tears.

"I was left in the orphanage when I was 3," he told the judges at this first appearance, "and when I was 5, I ran away after being beaten by people there. I sold gum or energy drinks on the street. I had that life for about 10 years."

He told the judges he used to sleep in stairwells or public toilets and decided he wanted to sing after seeing a performer in a nightclub where he was selling gum. "I was fascinated by the singer who sang on the stage so sincerely," Choi said.

Choi admits he is both scared and excited by the sudden global attention he has received. A Facebook fan page has been set up in his name, and the praise-filled comments are from people from all corners of the world.

The onetime construction worker said before his first performance that he does not sing very well. The audience and panel disagreed. "It was the first thing that I liked after I ran away and was living on the streets, the first thing I was ever able to dream about. It was a small little wish I had."

His wish of being able to sing has come true. He's odds-on favorite to win "Korea's Got Talent," and even if he doesn't, one of the judges has already promised to help him with voice training. Choi did attend an arts high school around the age of 16, graduating in 2009 -- it was the first time he went to school.

He said he finds it unbelievable that someone like him was able to be on a show like "Korea's Got Talent," and he says he is thankful "because now, I have a reason to live." The finals take place on August 20.
Posted by Joshua Lopez at 2:45 PM