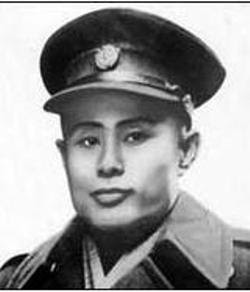 (CNN) -- Myanmar dissident Aung San Suu Kyi led more than 3,000 people Tuesday at a ceremony in the capital Yangon to mark the 64th anniversary of the death of her father, a national independence hero, eye witnesses said.

The event, known as Martyr's Day, is held every year to mark the assassination on July 19, 1947 of General Aung San and several other independence leaders.

Aung San remains a hugely popular figure in Myanmar for his role in winning independence from Britain.

Gatherings of such large crowds in Myanmar are rare and usually prohibited, so this is being seen as a test of public freedom after the self-proclaimed civilian government took power after last year's election, according to one local journalist who spoke to CNN and asked not to be named because of fears for his safety in the tightly controlled country.

November's elections drew fire from critics who said the voting was aimed at creating the facade of democracy, rather than a truly open and democratic system as military leaders claimed.
The ruling military junta -- a totalitarian regime -- refused to allow international monitors to oversee the race and would not allow international journalists to cover the voting from inside the country.

Meanwhile, one witness at the martyr's day event, who asked for his name not to be disclosed because he fears for his safety, said the authorities monitored Tuesday's events from a distance.
"I saw more than 10 trucks of armed police were on stand-by with full riot gear," he said. "There were around 300 police."

Agence France-Presse reported that plainclothes police took pictures of the crowds, but allowed hundreds to pass through checkpoints and continue to the memorial.

Wearing a white blouse and a traditional black wrapped skirt, known as a longyi, it was the first time in nine years that Suu Kyi had attended the ceremony -- the pro-democracy leader had been under house arrest for most of the last 20 years.

Suu Kyi's elder brother, U Aung San Oo, also laid a wreath at his father's mausoleum, while a guard of honor paid tribute to the "Martyrs" by sounding their bugles, state-run newspaper, New Light of Myanmar, reported.
Posted by Joshua Lopez at 2:54 PM