Murdoch's Wife Stands by Her Man 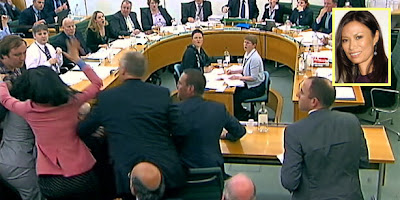 Wendi Deng-Murdoch (2nd L) lunges towards a man trying to attack her husband, News Corp Chief Executive and Chairman Rupert Murdoch, during a parliamentary committee hearing on phone hacking at Portcullis House in London on July 19, 2011.

With a tiger-like swipe at a protester, Wendi Deng became an unlikely hero in defense of her octogenarian husband Rupert Murdoch.

The 42-year-old third Mrs Murdoch, who came from middle-class China to marry one of the world's most powerful media moguls, gave a dramatic stand-by-your-man display.

The Yale University business school graduate, yoga devotee and former News Corp employee reacted faster than anyone else seated around Murdoch, including his son James, when the tense questioning by a British parliamentary panel was interrupted by a man throwing a shaving-cream pie at her 80-year-old husband.

She sprang from her seat behind her husband to smack the assailant, in a scene witnessed by millions around the world watching television coverage on Tuesday of the latest developments in the News of the World telephone hacking scandal.

In doing so, Deng made the embattled News Corp chief look vulnerable, and herself strong. But the incident and her reaction also helped to take some of the heat off of Murdoch who had looked tired, disconnected and irritable earlier in the hearing.

"That's our Wendi," said Vanity Fair writer Michael Wolff, author of a Murdoch biography.
"She is great -- incredibly full of energy, incredibly intelligent, living the life and just squeezing everything out of it," he said. "She is incredibly ambitious."

China's enthusiastic microbloggers made the incident one of the most popular topics on the country's Twitter-like service Weibo, even though the hacking scandal had previously attracted relatively little media coverage.

Her actions have even generated a new online nickname for her in China -- "Smack down sister". "Her reactions were super-fast! She walks away as the only hero," wrote Zhang Xin.

"When you marry, you should marry a Chinese woman. In times of danger, she will act," added Loulan Loulan. Deng however has not taken to her own Weibo account to talk about what she did. With 124,131 followers, her Weibo site is full of pictures of her with celebrities, such as Australian actors Nicole Kidman and Hugh Jackman, and references to her "hubby".

The daughter of a factory director in Guangzhou, China, Deng joined News Corp's Star TV as an intern in 1996, shortly after getting an MBA from Yale.

She met Murdoch in 1998 when she was a junior executive who acted as his interpreter during a business trip to China. The pair married in 1999 after Murdoch divorced his wife of 31 years.

The couple have two children, Grace and Chloe. Murdoch has four grown children, Prudence from his first marriage and Lachlan, James and Elisabeth from his second.

Lachlan has held key jobs at News Corp but now only sits on the company's board. The company recently bought Elisabeth's television production company Shine, though the deal is being contested by some shareholders, and she is expected to join News Corp's board.

James is a top News Corp executive. Until the scandal undermined his position, he was considered most likely to succeed his father as News Corp CEO.

A few years ago, several news reports said that she had battled Murdoch's adult children to secure a voting position for her children in the family trust, which holds the Murdoch stake in News Corp, worth billions of dollars.

"She reminds me in a certain way of Rupert himself. She is out to do what she wants to do," Wolff said, adding, "That really makes you someone to be reckoned with and someone who ultimately seems quite fearless."

Her actions have made her a Twitter sensation. "When I saw Wendi Murdoch last week in NYC, she told me last week she had to go to London to take 'care of her man' ... now I see what she meant," rap mogul Russell Simmons tweeted.

Experts said Deng's display shows she is a strong and fearless woman, a protector and a confidante to her billionaire spouse.

She came to America in 1988 after working as an interpreter for a Los Angeles couple -- Jake and Joyce Cherry -- who were working in China. When they returned to the United States, they sponsored her to live with them and to study.

The couple split and Deng had a brief marriage to Jake Cherry. Later she went to Yale and landed a job at Star TV in Hong Kong.

"Wendi Murdoch may be even smarter than Rupert Murdoch," said New York Daily News gossip columnist Joanna Molloy. "She is no dummy. She is a consigliere to him, she has a self interest. She is very protective of him and very involved."
Deng is also credited as producer of the just-released movie "Snow Flower and the Secret Fan," a story set in 19th century China about the tough cultural norms imposed on women.