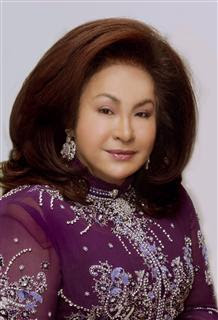 Datin Paduka Seri Rosmah Mansor, wife of Prime Minister Najib Abdul Razak, has denied the allegation that she had purchased a RM24.4 million diamond ring, calling it another slander against her. "There is nothing I want to say (in relation to the purchase of ring) because I have no time to entertain such issue.
"Let him (the blogger who made the allegation) say what he wants," she was quoted as saying by Malay daily Berita Harian in a report today.
"This is nothing funny, this is slander... what have I not experienced? I have experienced all (slander).
"Rather than entertaining such an issue, it is better for me to focus on people's issues because they are more important," she said after attending a function in Pokok Sena, Kedah, yesterday.
Rosmah ( right ) also said that as the wife of the prime minister, and with qualifications, it was more appropriate for her to contribute to the people, including her efforts to strengthen pre-school education in the country, especially in the rural hinterland.

Children foremost in her mind

"I'm more comfortable with what I'm doing now to help the people, particularly on the matter of strengthening pre-school education for children, especially in the rural areas because, for me, knowledge is the most valuable property for their future," she added.

The opposition has also alleged that Rosmah had bought a import-duty-free multi-million ringgit diamond ring.

Badrul claimed that a purported Customs Department information system printout, which he would hand over to the anti-graft body, implicates Rosmah as receiver of the diamond ring.
According to him, the "Natural Fancy Gray Cushion Cut Diamond", priced at RM24,458,400, was flown in through the KL International Airport.

Badrul alleged that the item was purchased through Jacob & Co, a New York-based fine jewellery company, and brought to Malaysia by one Jeremy Beh Sin Tee.
Posted by Joshua Lopez at 3:09 PM