New Coins for Malaysia in 2012 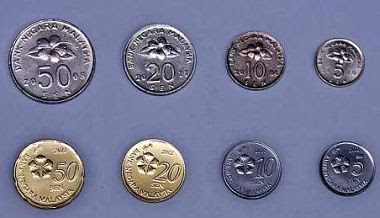 KUALA LUMPUR: Bank Negara will be introducing a new series of coins from early next year, replacing the current series which is 20 years old.

Meanwhile, the new series will be sold as commemorative coins from Tuesday, said Bank Negara Governor Tan Sri Dr Zeti Akhtar Aziz on Monday.
She also said new series of notes would be issued in Septemeber but declined to elaborate on this.
She said the new coins will go into general circulation only next year to enable coin machine operators, for instance, to recalibrate their machines accordingly.

The new coins - 50sen, 20sen, 10sen and 5sen - are smaller and lighter than the current coins, with more security features.
The coins also have features that make it easier for the visually-impaired to use.
She said the coins were designed by a Malaysian and wholly minted by Bank Negara's mint in Malaysia.
Posted by Joshua Lopez at 1:25 PM