CNN: Penang's Assam Laksa Makes It To Top 10 Yummiest Food In The World 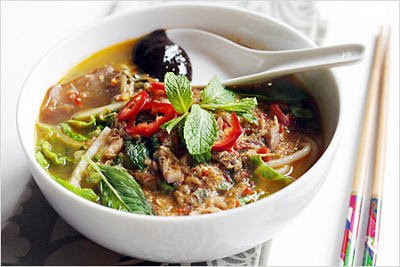 Congratulations To The State Of Penang & Her Peoples!

KUALA LUMPUR, July 25 — Spicy, sour, fruity and fragrant, Penang assam laksa was voted seventh out of 50 most delicious food in the world in a global poll that leaned heavily towards Asian flavours.
Malaysia’s sole entry beat out Indonesia’s beef rending (No 11) and Singapore’s twin national dishes, chicken rice (45) and chilli crab (35), but fell behind Thailand’s massaman curry, which took top spot.
The recent CNN Go feature did not say how it came up with the list, apart from saying its writers had “scoured the planet” for what they thought were the top 50 “foods worth travelling the world to gorge on”.
“Poached, flaked mackerel, tamarind, chili, mint, lemongrass, onion, pineapple . . . one of Malaysia’s most popular dishes is an addictive spicy-sour fish broth with noodles (especially great when fused with ginger), that’ll have your nose running before the spoon even hits your lips” was how the online lifestyle feature described Penang assam laksa.
But Malaysia’s northern neighbour appeared highly popular with the CNN Go writers, as it saw four different dishes finding its way into the list. Apart from the massaman bestseller, Thailand also scored top marks for tom yum goong (No 8), nam tok moo, a meaty dish of grilled pork and toasted rice (No 19), and its signature green papaya salad, som tam (No 46).
Other Southeast Asian offerings include Vietnam’s pho (No 28) and goi cuon, a rice-paper roll of shrimp, herbs, rice vermicelli and other ingredients, much like Malaysia’s poh-pia.
The top 50 also feature a number of “national foods” such as sushi from Japan and Britain’s fish and chips.
Posted by Joshua Lopez at 2:04 PM