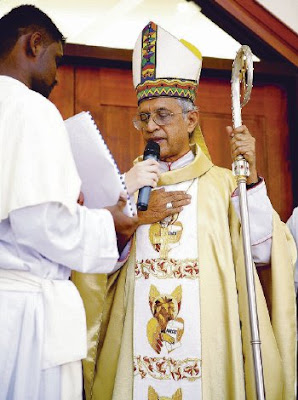 
Your Grace Tan Sri, Nice Try! A Leopard Never Changes It's Spots! We Catholics & The Church know these Leopards to well!

The head of the national Catholic Bishops’ Conference has also resurrected the set-up of an interreligious council, among a slew of measures he believes will help peacefully end the current ethnic, cultural and religious conflict in Malaysia.

“I had communicated to the Holy Father that we hope to see the establishment of an Inter-Religious Council [IRC] that would include key leaders and representatives from all religious groups; the establishment of a Ministry and the appointment of a full Minister to look into non-Islamic affairs,” said Pakiam in an formal message to all Catholics today, after his return from accompanying the Malaysian government delegation to visit Pope Benedict XVI in Rome last week.

The idea for a non-Islamic affairs ministry was first raised by the Anglican bishop of Kuching, Datuk Bolly Lapok in March this year following the Home Ministry’s seizure of 35,000 Malay bibles — or Al-Kitab as they are locally called — imported from Indonesia and meant for the Bumiputera Christian market here.

His call, aimed at pressuring the federal government to set up a special portfolio to take care of non-Muslim affairs, appears to have gained traction with the establishment of diplomatic relations with the head of the Catholic Church.

The Catholic archbishop said he had kept the pope informed of the “hopes and aspirations of the local church” through Archbishop Leopoldo Girelli who is at the moment still an apostolic delegate to Malaysia.

Pakiam added that the Church also hopes Putrajaya allows Catholic seminaries to resume regional priest training here; promote Christian-Catholic education and teacher training courses; and set up bilateral links between Islamic institutions in Malaysia and the Pontifical Institute for Arabic and Islamic Studies among other steps.

“I believe that these points, if they had not already been raised in the discussions between the Holy Father and the Prime Minister, will be raised in the future through diplomatic channels,” he said.

Pakiam said diplomatic relations was beneficial for Catholics as it gave them a “greater voice in Malaysian society” in order to prophetically proclaim the values which it defends and safeguards.

Penang is the first state in the country to set up an executive council portfolio to handle non-Muslim religious issues in early February this year, in conjunction with the United Nations’ Interfaith Harmony Week.

The idea for the IRC was first mooted in the 1980s but was spiked early on following objections from Muslim groups such as the Islamic Development Department (Jakim).

The Najib administration formed its special committee to promote harmony and understanding among religious adherents in April last year but the interfaith panel appears to have stymied following the death of its coordinator, Datuk Ilani Isahak on February 24. Her replacement has yet to be announced.
Posted by Joshua Lopez at 5:15 PM