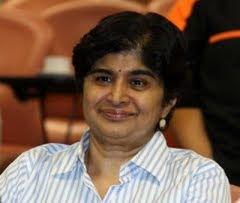 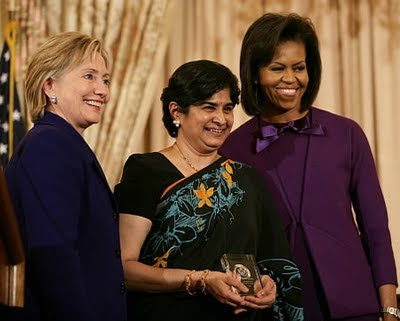 Congratulations, Applause & Salutations To Dato'Dr.Ambiga Sreenevasan! An Iron Statesman You Clearly Are!
PETALING JAYA: Bersih 2.0 chairman Datuk S. Ambiga has been conferred an honorary doctorate in law from the University of Exeter in Britain.
Lawyer Tommy Thomas yesterday confirmed that Ambiga left for Britain to receive the award. “There were three possible push factors for the award, the first two being services to her profession as a lawyer as Ambiga had been vocal during her two-year term as the Malaysian Bar president from 2007 to 2009,” he told an online news portal.
As former bar president, Ambiga has been advocating good governance, democracy, and human rights.
She organised the “March for Justice” in Putrajaya that, among other things, called for judicial reform in 2007 and is chairman of Bersih 2.0 which organised an illegal rally on July 9.

JULY 23 — Good Morning! Chancellor, vice chancellor and graduating students.It is so good to be back!I am deeply moved by the conferment of this honour upon me. That it comes from my alma mater is especially significant for me. That it comes at this time is almost providential, for it allows me and all lawyers to reflect on our roles in the societies we live in.

For this honour and this moment of reflection, I extend my grateful thanks to the Council and Senate of the University of Exeter.Tired of injustice and oppression, people the world over are crying out for truth, goodness, justice and universal love and understanding.The events in Malaysia over the past six weeks culminating in the rally for free and fair elections on the 9th of July, has taught me so much more than I could have ever learned in the last 30 years as a practising lawyer.

My team and I faced first-hand the full force of the unleashed power of the state, and I realised then the importance of the independence of the Institutions of government, particularly the judiciary, to check such abuses of power.I also realised how real and present the absence of the Rule of Law can be.In countries where the Rule of Law reigns strong and true one probably does not even talk about it. But in countries that veer towards Rule by Law, talking about getting back to the basics is crucial.In many countries, Rule by Law is reflected in the existence of repressive laws that violate the fundamental rights of its citizens.

One example of this is preventive detention laws that lock people away without affording them the basic right to a trial. There are many examples of such oppressive laws worldwide and they are not confined to underdeveloped or developing countries.

As lawyers, we are in a unique position. Our years of legal study and practice teach us to see and appreciate the fundamental role that the Rule of Law plays in guaranteeing that the state governs its citizens in a just and democratic manner.Who better to remind those in power of their responsibilities to their citizens than lawyers trained in understanding the difference between “Rule of Law” and “Rule by Law”?

Our role as lawyers must therefore extend far beyond traditional legal practice.Here, I make no reference to rules, guidelines, documents, or declarations. My only reference point is our conscience. Can we as lawyers, ever sit back and watch the erosion of fundamental liberties of the people around us and do nothing? Clearly, silence in these circumstances, is not an option.

When I graduated from this university about 30 years ago, things were of course very different. Today the Internet and social media has empowered people with a continual flow of unfiltered and up-to-date information. No longer can the manipulation and control of information be effectively used by those in power to suppress either thought or action.

You are in a world where you know instantly of injustices taking place in any part of it. In this global village drawn together by so many factors, we are one. We can reach out to each other using these new means of communication and we owe it to each other to stand together for what is right.You may say, “But I studied law to be a solicitor or barrister and to earn money for a decent standard of living”. There is nothing wrong with that, I assure you. I run a commercial litigation practice in a partnership of four where we also do public interest litigation. The two can co-exist quite comfortably.

The point I make is this.You are graduating from one of the best universities in the country if not on the planet! You are special. And you are now a proud member of an army of people that is equipped with all that is necessary to both practise law and to fight injustice.I urge you to use this arsenal of knowledge and your passion for justice to fight for those who are downtrodden.

You have already heard of the events of July 9th in Malaysia. Whilst it brought out the worst in some, it brought out the best in others and this is where our hope lies. There were some in government who opposed the methods used to shut us down. Even doctors left their comfort zones to speak up against injustices. And of course there were the lawyers and the independent media who stood on the side of truth and justice.
However, the real heroes of that day are our friend and supporter Allahyarham Baharuddin Ahmad who paid the ultimate price in fighting a noble cause, the six members of the Socialist Party of Malaysia who, as we speak, sit in solitary confinement under preventive detention laws and finally the brave people of Malaysia who overcame their fear of intimidation and harassment to uphold their fundamental rights.
With all my heart I dedicate this honour you have bestowed upon me to them.