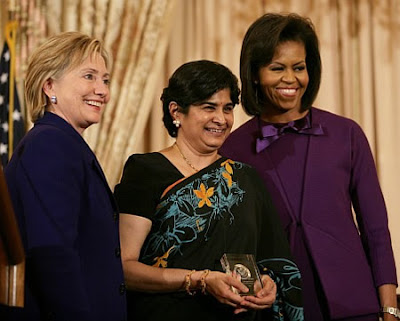 Sreenevasan has filed a suit against the Sarawak government for barring her entry into the East Malaysian state two months ago, saying the move is against the Federal Constitution.

“Yes filed and leave application will be heard 13 July,” the Coalition for Fair and Free Elections (Bersih 2.0) chairman told The Malaysian Insider via a text message.

Sarawak and Sabah are allowed to deny entry even to Malaysians under the agreement to form Malaysia in 1963 with Malaya and Singapore, but must give a reason in doing so.

Ambiga was stopped at the Kuching International Airport on April 15; but no reasons were given as to why she was barred from entering the hornbill state where she was to monitor the polling process the next day.

The former Malaysian Bar president was travelling with two other Bersih 2.0 committee members — Subramaniam Pillay, a member of Aliran and Arul Prakash, a programme officer of Komas — and Ivy Josiah, executive director of Women’s Aid Organisation.

The trio were allowed in. Ambiga joined a list of activists including Steven Ng, Cynthia Gabriel, Wong Chin Huat, Johan Tan and Subang PKR MP Sivarasa Rasiah, who were denied entry to the state in the days leading up to the state election in Sarawak, which ruling Barisan Nasional (BN) easily retained.

Bersih 2.0 has demanded that the Malaysian Human Rights Commission (Suhakam) investigate the “abuse and arbitrary use of powers” by the Immigration Department and the Sarawak state authorities.

Long-serving Sarawak Chief Minister Tan Sri Abdul Taib Mahmud has not responded to criticisms about denying entry to Malaysian activists while Putrajaya has also remained silent over a citizen’s right to free movement within the federation since the hornbill state formed Malaysia with Malaya, Sabah and Singapore in 1963.

However, pro-government newspapers in West Malaysia have been playing up reports of a graft probe against Taib, who has rebuffed Putrajaya’s efforts to get him to end his 30-year rule, marked by reports of land grabs from the natives.

Malaysia has been found to trail the rest of the world in protecting freedom of religion, expression and other basic rights, managing only to place 59th out of 66 countries surveyed by the World Justice Project (WJP) for its Rule of Law Index 2011.

Low scores for freedom of religion, expression, assembly and privacy also meant that Malaysia placed second to last in its income group, which includes other upper-middle-income countries like Russia, Brazil, Mexico and Iran. This is the first time Malaysia has been included in the survey.
Posted by Joshua Lopez at 1:11 PM