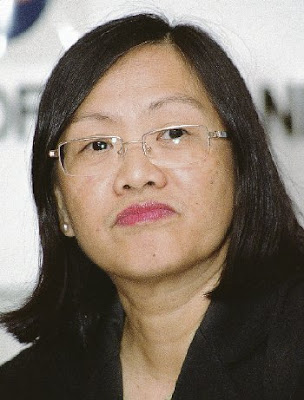 Petaling Jaya, Apr 15 - Bersih 2.0 strongly condemns the barring of Dato' Ambiga Sreenevasan, Chairperson of Bersih 2.0 and former President of Bar Council from entering into Sarawak at the Kuching airport this morning. The aim of Ambiga Sreenevasan's trip was to observe the state elections and to remind the state government and the Election Commission of the necessity to ensure free and fair elections to be carried out at Sarawak state election. This is Bersih 2.0's commitment to advance free and fair elections in Malaysia.
Ambiga was there together with Bersih 2.0 Steering Committee members, Subramaniam Pillay, member of Aliran, Arul Prakash, Programme Officer of KOMAS. It is ironical that the latter three were allowed in, together with Ivy Josiah, Executive Director of Women's Aid Organisation and not Ambiga.
Bersih 2.0 is extremely concern with this continuous abuse of power by the state of Sarawak in denying Malaysians from entering into or exiting Sarawak. This tantamounts to a violation of the freedom of movement and can only be viewed as a blatant abused by the Sarawak immigration department and the state authorities to stifle dissent. It also raises suspicion that the state authorities has something to hide, expeically with the recent barring which happened during the Sarawak state election.
The barring of Ambiga from Sarawak adds to a list of human rights activists, including Steven Ng, Cynthia Gabriel, Wong Chin Huat, Johan Tan, and Subang Member of Parliament, Siva Rasiah who were denied entry by the Sarawak state authorities. No reasons were given on why they have been barred.
Bersih 2.0 demands the Sarawak state authorities to show cause reasons why these human rights activists have been denied entry. If the state authority is unable to do so, then it should immediately lift the ban on these activists.
SUHAKAM has been silent on such denials of entries and we call upon SUHAKAM to act immediately and conduct an open investigation against the abuse and arbitrary use of powers by the immigration department and the Sarawak state authority.
Maria Chin Abdullah and Toh Kin WoonBersih
2.0 Steering Committee members
For BERSIH 2.0
Posted by Joshua Lopez at 1:04 PM