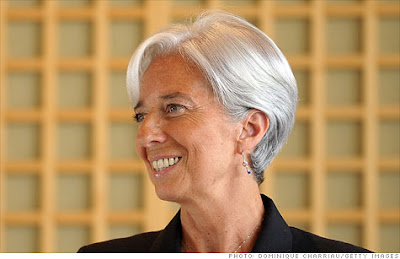 NEW YORK (CNNMoney) -- Christine Lagarde, the finance minister of France, was voted to the post of managing director of the International Monetary Fund on Tuesday.

Lagarde, the first woman to run the global financial institution, will succeed Dominique Strauss-Kahn, who was arrested last month in New York on sexual assault charges.

The vote on the influential post came at a crucial time for the IMF, which has been working closely with the European Union and the European Central Bank to provide financial support for Greece and other troubled European economies.
Speaking in Paris, Lagarde called on the Greek government to set aside political differences and approve the additional austerity measures that are a condition of its next installment loans from the IMF and EU.
She also suggested that Greece's creditors, namely French and German banks, must be willing to make concessions.
"It must be done in a concerted, collective way," she said in comments translated from French. "All the lenders must come to the bedside of Greece and Greece must itself take charge in a responsible manner."
Lagarde will serve a five-year term as the global financial institution's managing director and chairman beginning next month, the IMF said.
"I am deeply honored by the trust placed in me by the Executive Board," Lagarde said in a statement.