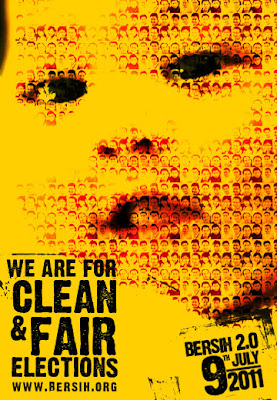 ROTFL!!! It's The General Elections !!! Does PERKASA think that we Malaysians Are Bigots like them?!!!

KUALA LUMPUR: Despite the stern warning from Inspector-General of Police Tan Sri Ismail Omar yesterday, the organisers of all three rallies on July 9 will be going ahead with their plans. Bersih 2.0 rally organiser Datuk Ambiga Sreenevasan said she would meet with Ismail today to discuss matters relating to the rally and would address the public further after the meeting."But as it stands, Bersih will continue with the gathering," she said.

Umno Youth chief Khairy Jamaluddin said the wing's counter-rally to Bersih would go on, "no matter what happens".

The Rembau member of parliament also took a dig at Ismail, saying the police should not threaten the people. "It is incumbent upon the police to protect citizens and not to threaten them." Khairy said many protocols were in place for people going to the rally under Umno Youth's banner.

"We have had many safety and security briefings to make sure Umno Youth will not contribute to violent acts on July 9," he said, adding that "crowd control officers" would be among the wing's people.Khairy will be sailing to Gaza on a humanitarian mission at the time of the rally, so Umno Youth information chief Datuk Rizal Merican will head the gathering.Meanwhile, Pertubuhan Pribumi Perkasa Negara (Perkasa) vice-president Musli Oli said the police could arrest as many people as they wanted, but it would not change their message.

"The people are no longer afraid because we are becoming increasingly aware of our rights to freedom to choose our government." In a surprising deviation from what his president, Datuk Ibrahim Ali, has been saying, Musli said he believed Perkasa and Umno Youth should join forces with Bersih."If there is dishonesty on the government's part, all political parties must band together to correct that error, in this case, unfair election processes," he said.Ibrahim could not be reached for comment.
Posted by Joshua Lopez at 1:58 PM