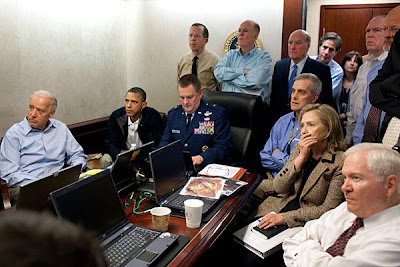 (CNN) US President Obama watched the raid in which Osama Bin Laden was killed in real-time, according to White House Counter-Terrorism advisor John Brennan.

Speaking at a news conference he said that "the minutes passed like days" as senior governmnet officials watched events unfold.

Mr Brennan also told journalists that at one point in the operation a woman was used as a human shield to protect Bin Laden from incoming fire.
Posted by Joshua Lopez at 10:18 AM