DPM: BN Is Not Anti-Christian 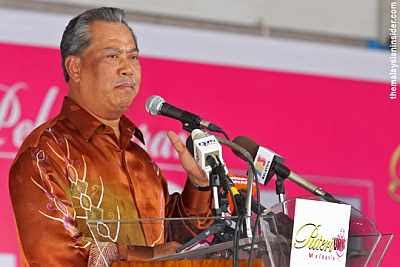 Coming from you, i'm even more sceptical and worried!

SIBU, April 11 — Deputy Prime Minister Tan Sri Muhyiddin Yassin has defended the government’s handling of the Alkitab dispute, saying that the government was not anti-Christian.

He also criticised Pakatan Rakyat (PR) for continuing to harp on the dispute even after he said it had been resolved by the government. “When have we ever been anti-Christian or anti-religion? It’s all a big lie. The Barisan Nasional has always upheld the Rukun Negara. “What they are spreading is provocation because they know people will be worked up and angry.

We have resolved it (the dispute) through the BN spirit,” Muhyiddin (picture) told reporters during a Sarawak election campaign stop here. “This is dangerous as they will work people up. Also, there have been a lot of provocative SMSes and I hope that the authorities can investigate this,” he said, adding that the federal government has already resolved the dispute. Christian groups and the government had been at loggerheads over the usage of the Bahasa Malaysia Bible or Alkitab.

It started when 35,100 copies were impounded by the Home Ministry in Port Klang and Kuching. The government had wanted to stamp the bibles with serial numbers and labels that said “For Christians” before releasing them. These conditions were rejected by Christian groups.

On April 10, the government said the Bible Society of Malaysia decided to accept its 10-proposal to end the impasse but Christian groups said they were not in a hurry to finalise their decision on the issue. On a separate issue, Muhyiddin also defended his and the Prime Minister Datuk Seri Najib Razak’s whirlwind visits throughout Sarawak, saying that it was part of the overall BN campaign strategy. “ What about (DAP adviser) Lim Kit Siang, (Penang Chief Minister) Lim Guan Eng and (PKR de facto leader) Datuk Seri Anwar Ibrahim? Are they also not federal leaders campaigning in Sarawak. Are they not also spending all their time here?”

PR leaders have said that the week-long presence of Najib and Muhyiddin reflected the BN’s worry of losing severely in the April 16 Sarawak polls. Najib is spending an unprecedented six days traversing the length of the hornbill state to campaign for the BN. T

he opposition pact has charged that the flood of visits from federal ministers was because the Sarawak BN had become a liability with its greying candidates and spiritless campaign. “It’s not a question of not trusting the state BN. They (PR) are the ones who are actually worried about us. They are worried because they are going to lose badly.”

http://www.bharian.com.my/bharian/articles/BNbukanantiKristian_Muhyiddin/Article/index_html
Posted by Joshua Lopez at 10:00 AM