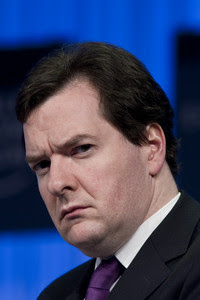 While the UK's economy may not be the fault of the new government or Labour, the golden question i have is, what has George Osborne have to "cushion" or "Turn It Around"? This is a great challenge for the new government and Prime Minister David Cameron. One must understand the fact that the poor economy is a global crisis especially in Europe.

The Office for Budget Responsibility -- which monitors government borrowing and sets economic forecast -- may say unemployment will rise to about 8.2 percent this year compared with an 7.9 percent forecast made in November. The deficit will increase over the next two years amid weaker growth, analysts say.

“We have to be realistic where we are coming from as a country,” Osborne said on BBC Television’s Andrew Marr Show yesterday. “We have had the biggest banking crisis in our history, the biggest deficit and, now, the additional headwind of rising oil prices.”

Having embarked on the biggest squeeze on public spending since World War II, Osborne said he will now set his sights on measures aimed at improving the structure of the economy.