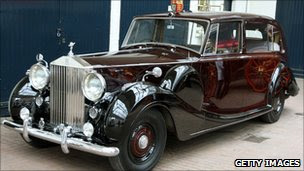 The Rolls-Royce was a present to the Queen to mark her Silver Jubilee in 1977
Kate Middleton will be driven to her wedding in the same luxury car that was attacked in student protests last year.

The Rolls-Royce, which was damaged by a mob as it took the Prince of Wales and Duchess of Cornwall to a theatre, is being repaired for Kate's big day.

The newlyweds will then ride in the carriage used by Prince William's parents after their wedding in 1981.

Details of the travel arrangements for the marriage on 29 April have been released by staff from the Royal Mews.

Prince Charles and Camilla were heading to the Royal Variety Performance in December when the Rolls-Royce Phantom VI limousine car was splattered with white paint and had a rear window cracked.

News that the same car - a present to the monarch on her Silver Jubilee in 1977 - was being used to take Kate to Westminster Abbey was revealed by Crown Equerry Col Toby Browne.