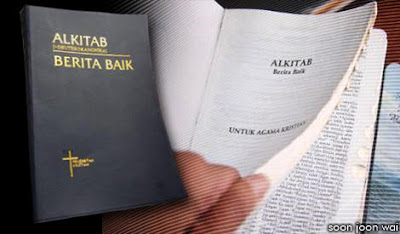 KUALA LUMPUR, March 15 — The Najib administration ordered the release of 35,000 Malay-language Bibles which were seized at the ports of Kuching and Klang, bowing to pressure from Christian churches and Pakatan Rakyat (PR) politicians.

“This is a reasonable compromise in managing the polarities of views between Christians and Muslims in the country,” said Minister in the Prime Minister’s Department Datuk Seri Idris Jala in a statement this evening.

The Cabinet was set to discuss the issue on Friday with one eye on the Sarawak polls set to take place next month.

But with the seizure of the bibles drawing protests from Christians nationwide, a majority of whom live in Sabah and Sarawak, the federal government was forced to act today.

The Christian Federation of Malaysia, which represents 90 per cent of churches in Malaysia, has said that Prime Minister Datuk Seri Najib Razak made a decision to release the Alkitabs but so far, the home ministry, which controls customs, has refused to hand over the bibles.

Christians, who make up close to 10 per cent of Malaysia’s 28 million population, use Bahasa Malaysia in Sabah and Sarawak churches to preach to the multi-ethnic congregation who each have a distinctive tribal language.

But evangelist churches there, such as Sidang Injil Borneo (SIB), have crossed the South China Sea to preach to the growing number of Sarawakians and Sabahans who are settling down in the peninsula after furthering their studies or finding work here.

Jala, who is a Sarawakian Christian, said that the government had decided on the release of the Alkitab in line with a 1982 gazette under the Internal Security Act which allows its limited and controlled importation and circulation on condition that the books are stamped: “For Christians Only.”

“Since 1982, with this gazette, there have been no problems in its implementation. As such, taking into account this fact, the government has decided to apply the 1982 gazette and release the bibles accordingly,” the statement said.

Jala said that after a careful and thorough review, the Attorney-General confirmed that the release of the bibles did not prejudice the ongoing court case of the Kalimah Allah issue. The minister also noted that the Sarawak government categorically expressed its view that the impounded bibles should be released.
Posted by Joshua Lopez at 8:14 PM