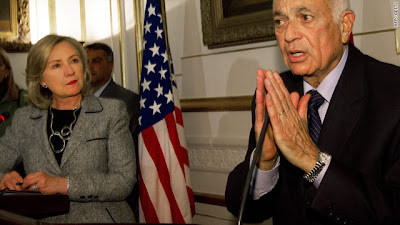 Democarcy In The Making & It's Great News!

Clinton pledged $90 million in emergency economic assistance during a meeting in Cairo with Foreign Minister Nabil Al-Araby. She is the highest ranking U.S. official to visit Egypt since the overthrow of former President Hosni Mubarak.

"The United States will work to ensure that the economic gains Egypt has forged in recent years continue, and that all parts of Egyptian society benefit from these gains," a State Department statement noted.

Among other things, the administration is also working with Congress to create an "Egypt-American Enterprise Fund" to help spark private sector investment in the country, the statement said.

The U.S. Export Import Bank, according to the statement, has also already approved $80 million in insurance backing for letters of credit issued by Egyptian financial institutions.

"Egypt and the United States have many strategic interests in common," Clinton declared. The two countries don't agree on every key issue, but it is critically important to maintain lines of communication and an open relationship, she said.

Clinton said she supported a move announced earlier in the day by Egyptian authorities to overhaul their internal security operations.

"The new system will not be allowed to meddle in the rights of citizens in Egypt," Interior Ministry spokesman Major Alla Mahmoud asserted. "It will deal with terrorism matters and emergency situations."

While in the region, Clinton is also scheduled to visit neighboring Tunisia to express support for that country's revolt.
Posted by Joshua Lopez at 5:47 PM