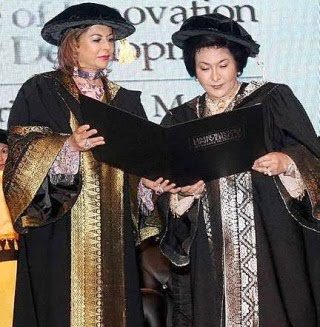 Honorary doctorate for Rosmah: Datin Seri Rosmah Mansor receiving the Honorary Doctorate of Innovation in Human Capacity Development award that was conferred on her by Limkokwing University from the university’s chancellor, the Sultanah of Pahang, Sultanah Hajjah Kalsom Tuesday. The Prime Minister’s wife is the inaugural recipient of the award for her distinguished leadership in transformational human capital development, which is reflected by her unwavering passion and commitment to the cause of early childhood education.

CYBERJAYA, March 22 2011 (Bernama) -- The sudden surge of delinquency among Malaysian youths, who are a menace to society when they get involved in drugs and crime, has become a worrying trend, said the prime minister's wife Datin Seri Rosmah Mansor. She is concerned that this segment of the population may be left out of mainstream development and are manifesting delinquent behaviour.

Rosmah said they might easily be influenced to indulge in risky activities such as illegal, rowdy and dangerous motorcycle racing where the media and public had labelled these youths as Mat Rempit.

"Youths are the future of any nation. Unless they are well-educated and equipped with the necessary skills, attitude and aptitude in life, they will never reach their highest altitude." She said this after receiving the Honorary Doctorate of Innovation in Human Capacity Development from the Limkokwing University of Creative Technology, the first such honour, here Tuesday. The honorary doctorate was presented to her by the university's Royal Chancellor, Sultanah Pahang Sultanah Kalsom, and witnessed by Prime Minister Datuk Seri Najib Tun Razak.

The honour was for Rosmah's distinguished leadership in transformational human capital development, reflected by her unwavering passion and commitment to the cause. Later, a taped, special tribute song titled "Wanita Sanjungan Negara" and dedicated to Rosmah, was played accompanied by a video clip, at the ceremony.

"Internships and job placements are also arranged for them. The outcome of the two camps for 60 youths has been positive, with them reporting gainful employment and responsible behaviour," she said. On the honour conferred on her, Rosmah said it would serve as an encouragement for her to continue pursuing her work, the Permata programme.

"After overcoming the initial challenges and teething problems and with the government's full support, it is most heartening for me and those who work with me to see this programme currently being rolled out nationally to more than 600 centres involving more than 20,000 children within the span of four years. "And just after a year in operation, a study by Universiti Perguruan Sultan Idris (UPSI) revealed that Permata children are one to two years ahead of their peers in cognitive, social and emotional development," she said. Source : BERNAMA

Born in Kuala Pilah, Negeri Sembilan on December 10th 1951, Datin Paduka Seri Rosmah Mansor has come a long way from her home in the suburbs and her secondary schooling at the Tunku Khursiah College, a prestigious boarding school for bright Malay girls in Malaysia.

She served at Agriculture Bank Malaysia until 1983, and then took on the position of Business Development Manager at Island and Peninsular Berhad where she served until 1987.Datin Paduka Seri Rosmah Mansor left Island and Peninsular to become a full time politician’s wife to Dato Sri Mohd Najib bin Tun Hj Abd Razak, knowing that the demands of her husband’s work dictates that she gives her home and family life as much care and attention as possible.

Datin Paduka Seri Rosmah Mansor was also keenly aware that she would have to gradually take on more public roles as she continued to give pivotal support to her husband’s political rise.Today, as the wife of the Prime Minister of Malaysia, Datin Paduka Seri Rosmah Mansor wears many hats. She is the President of the Welfare Association of Minister’s Wives (BAKTI). She holds the position of Patron for various associations, among others are Children in Hope Foundation, Malaysian Nature Society, Society of the Orthopedically Handicapped Malaysia, Malaysia Aids Council, National Heart Institute Foundation, Thalasemia Association, National Athletes’ Welfare Association and the Foundation for the Development of Underprivileged Children. She is also on the Badminton Association of Malaysia (BAM), as well as the President of the Girl Guides Association.

Datin Paduka Seri Rosmah Mansor strongly believes that human capital development begins with children and it is an investment for the nation. This will lay a firm foundation for national growth, productivity, social cohesion and peace. She has thus been actively engaged in driving this initiative forward through the PERMATA project. She then started the nationwide movement on the development of early childhood education and care which focuses on children below 5 years.

Through her effort, to date, more than 600 Permata Negara Centers have been set up throughout the country. This programme has since been widened to the Gifted and Talented Children with special abilities in the fields of academic and music named PERMATA Pintar and PERMATA Seni. The programme was further expanded to children with special abilities in spiritual aspects i.e. Permata Insan.In recognition for her many contribution to the country and its people, Datin Paduka Seri Rosmah Mansor has been conferred various awards from the States of Kedah, Melaka, Selangor, Kelantan, Negeri Sembilan, Sabah and Pahang. She was also awarded an honorary Doctorate in Education by University Technology MARA Malaysia.
Posted by Joshua Lopez at 2:00 PM