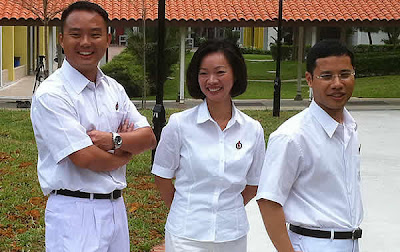 A former Malaysian I Heard...

The People's Action Party unveiled its first new female candidate for the upcoming General Elections (GE), along with two others.

Ms Foo Mee Har, 45, is the global head of premium banking for Standard Chartered Bank. She graduated with a psychology degree from the University of New South Wales.

Having been with the PAP for more than a year, Ms Foo has taken part in various community events and Meet-the-People Sessions (MPS). She has also been inducted into the Executive Committee as Assistant Secretary to the Women's Wing.

Describing her first MPS session as "wonderful" and a "defining moment", Ms Foo said she was inspired by the members at the Zhenghua branch who paid great attention while listening to the grievances of the residents.

With speculation that Ms Foo is largely tipped to contest under the Holland-Bukit Timah GRC, the mother of two sons said that it is the party's decision on where she will be standing as a candidate.

"Where we are deployed is where we are most optimized, and it's up to the party to decide."
Posted by Joshua Lopez at 1:57 PM