Clinton: No Perfect Option For Libya 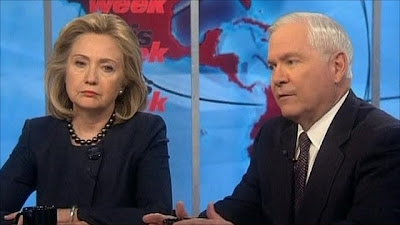 It must be a rather complex and sticky situation for the US. The US is highly needed in the political crisis faced by middle eastern countries yet the US is highly criticized by both sides of the fence. America herself has multiple issues to be settled and the government is left in between national issues and middle eastern issues which cannot be ignored at this point in time. Yes, there ain't a perfect option for Libya and Her people.

(BBC) US Secretary of State Hillary Clinton and Secretary of Defence Robert Gates have been speaking on American television about the situation in Libya.

Speaking on ABC's This Week Mrs Clinton said she believed that President Obama had ordered the "best available option".

Robert Gates said the involvement prevented the "large scale slaughter" that was beginning to take place in the country.