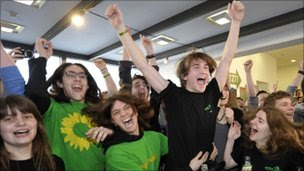 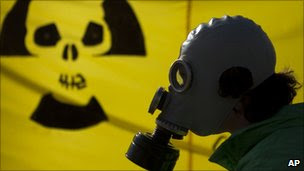 Anger at nuclear policy drew 200,000 on to Germany's streets on Saturday

The Catastrophe in Japan significantly brought Merkel Down From Her Throne!

(BBC) It's hard to put your finger on one factor that undoes a political party at an election. Often, it is something vague and hard to define. But the defeated Christian Democrat leader of Baden-Wuerttemberg, Stefan Mappus, tried: "The horrible pictures from Japan, the horrible events in Japan, was the main issue over the last two weeks. "There was no other campaign topic," he said, before adding intriguingly, "and the winds from Berlin were also blowing against us."Libya reticence By "winds from Berlin", he may have meant a general sense of unease at Chancellor Angela Merkel's stance on a string of issues.

She changed policy on nuclear power two weeks ago by putting the policy she had insisted on six months earlier into review. On the euro, her critics say she's talked tough about bailouts but agreed to mechanisms to let them happen. The popular newspaper Bild has taken issue with her on that, and Bild is not a foe that a chancellor to the right of centre would want. On the other side of this argument, people in her own party argue that she should come out fighting for the euro, on their side, by pointing out that it has benefited German exporters greatly.

On top of that, she declined to get involved in Libya, much to the annoyance of some in Germany's foreign ministry. Germany has been hammering hard at the door of the United Nations Security Council, seeking a permanent place and promising to shoulder a greater international burden in return. All of this adds up to a sense, according to Mrs Merkel's critics - even her friendly ones - of a government being overly moved by the immediate winds of politics, rather than the long-term needs of policy.

One of her own ministers was quoted in leaked minutes of a meeting as saying that the sudden U-turn on nuclear power was based on electoral politics and was "not rational" - though he later said that the leaked minutes were not an accurate representation of what he had said. So nobody thinks this is a government riding the crest of a wave of adulation.

The old "Teflon" chancellor is not bestriding the land. Mrs Merkel doesn't have to hold a federal election until 2013, but may be forced to call one earlier. She may hope the economy strengthens her ratings, but the difficulty in that hope is that Baden-Wuerttemberg is the most prosperous part of Germany - and the voters there showed little gratitude to the party of government for that.
Posted by Joshua Lopez at 12:10 PM