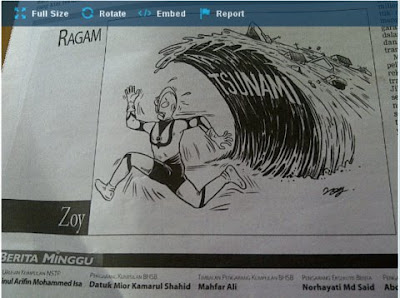 PETALING JAYA: Berita Harian has issued a public apology (FORCED TO!) over its publication of a cartoon depicting the devastating tsunami and earthquake that swept Japan and killed thousands.

"We apologise for the publication of the cartoon in Berita Minggu. We had no intention of poking fun at the disaster that has befallen the nation of Japan and its people.

"In fact, we greatly sympathise with their plight and share the sorrow of the Japanese people," the daily's editor wrote.

The cartoon, drawn by Mohd Zohri Sukimi or more popularly known as Zoy, showed the popular Japanese icon Ultraman running away from an oncoming tsunami.

The publication created a buzz on social networking sites with politicians and the public criticising the daily's poor judgment, describing the cartoon as "distasteful" and "insensitive".

Umno Youth chief Khairy Jamaluddin tweeted that the paper must apologise for publishing the cartoon which was "totally insensitive towards the Japanese".

"It is unfortunate that it was published below Berita Harian Sdn Bhd group editor (Datuk Mior Kamarul Shahid's column)," he tweeted.

I hope that the earthquake victims and the copyright holders of Ultraman in Japan will sue these Berita Harian assholes till their pants (no underwear spared) drop!!!