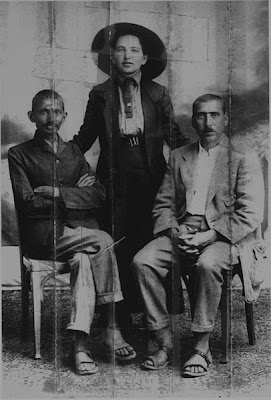 "How completely you have taken possession of my body" - Gandhi

An American author on Tuesday angrily dismissed claims his new book on Mahatma Gandhi alleged that India's independence leader was a racist bisexual who left his wife for a bodybuilder. Indian newspapers were outraged by reviews in the United States and Britain of Joseph Lelyveld's biography that focused on Gandhi's relationship with German-Jewish architect and amateur bodybuilder Hermann Kallenbach.

Gandhi lived with Kallenbach in Johannesburg for about two years from 1907 before leaving South Africa to return to India in 1914. "How completely you have taken possession of my body," Gandhi was quoted as saying in a letter to Kallenbach. "This is slavery with a vengeance."

The British Daily Mail ran the headline "Gandhi 'left his wife to live with a male lover' new book claims", while the Daily Telegraph review said he had "held racist views against South African blacks." But Lelyveld, a former executive editor of the New York Times, said "Great Soul: Mahatma Gandhi And His Struggle With India" had been grossly distorted by the press coverage. "I do not allege that Gandhi is racist or bisexual," he said in a statement. "The word 'bisexual' nowhere appears in the book." "The word 'racist' is used once to characterise comments by Gandhi early in his stay in South Africa... the chapter in no way concludes that he was a racist or offers any suggestion of it." The Wall Street Journal said Lelyveld's book suggested Gandhi -- who is revered as the father of independent India and an icon of non-violence protest -- was "a sexual weirdo, a political incompetent and a fanatical faddist." "Mr. Lelyveld makes abundantly clear... the love of his life was a German-Jewish architect and bodybuilder, Hermann Kallenbach," the Journal review said.

It quoted a letter Gandhi wrote to Kallenbach saying "your portrait (the only one) stands on my mantelpiece in my bedroom." Gandhi's relatives in India, where the book has not yet been released, attacked the accusations about Gandhi's love life. "These western writers have a morbid fascination for Gandhi's sexuality," his great-grandson Tushar Gandhi told the Delhi-based Mail Today. "It only helps them sell their books. It is always open season with Gandhi." The book will go on sale in the United States on Tuesday.
Posted by Joshua Lopez at 11:07 AM