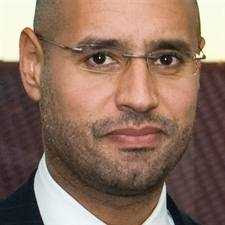 Dream On Saadi! Dream On!
LONDON: Muammar Gaddafi’s son said his father would be a “big father” adviser in any new regime after the “positive earthquake” rocking Libya, the Financial Times reported.
“My father would stay as the big father who advises,” Saadi Gaddafi, one of the veteran strongman’s seven sons, told the British newspaper by telephone from Tripoli.
“After this positive earthquake, we have to do something for Libya,” he said. “We have to bring in new blood to govern our country.”
Saadi, Gaddafi’s third son, claimed that 85% of Libya was “very calm and very safe.”
“It is now 2pm in Tripoli and it is very calm and quiet,” he said. “Fifty or 60% of the people are working normally.”
Gaddafi opponents appeared in control of the country’s coastal east, from the Egyptian border through to the cities of Tobruk and Benghazi, with government soldiers switching sides to join the uprising, according to reports.
Despite the setbacks, Saadi was unmoved and promised that any territory lost would be regained “sooner or later.”
Gaddafi, who has ruled Libya for more than 40 years, became increasingly isolated on the world stage as estimates suggested that 640 to more than 1,000 civilians were killed in the backlash by his forces.
“There are people protesting against my father’s rule, it is normal. Everybody needs to be free to express their opinion,” said Saadi, a former professional footballer. — AFP
Posted by Joshua Lopez at 10:59 AM