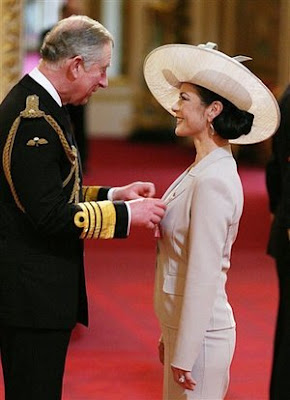 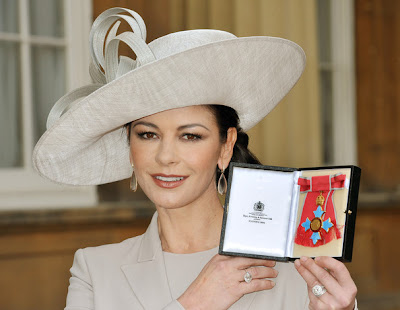 CONGRATULATIONS CATHERINE ZETA-JONES !!!
Catherine Zeta-Jones had a date at Buckingham Palace yesterday! The actress received a CBE (Commander of the Order of the British Empire) from Prince Charles at the royal palace and was joined by her family.
The Welsh actress – who was awarded the accolade for services to the film industry and to charity – was included in the Queen's Birthday Honors list last year and traveled to Buckingham Palace to pick up the prestigious honor today.Accompanied by her 61-year-old husband Michael Douglas - who was recently treated for throat cancer - and the couple's two children Dylan, 10, and seven-year-old Carys, Catherine beamed as she was awarded the honour by the monarch’s son.When the announcement of the accolade was made last year, the 41-year-old actress admitted she was "humbled and thrilled" to have been given the award. She said: "I am absolutely thrilled with this honor.
As a British subject, I feel incredibly proud, at the same time it is overwhelming and humbling. And my mum and dad are delighted beyond belief."Catherine shot to fame after starring in British TV drama The Darling Buds of May in 1991 before moving to the US, where she got her big breakthrough playing Elena Montero in The Mask Of Zorro in 1998. However, her biggest success came in 2002 when she won the Academy Award for Best Supporting Actress for her role as Velma Kelly in the film adaptation of Chicago. - http://www.zimbio.com/
Posted by Joshua Lopez at 11:22 AM