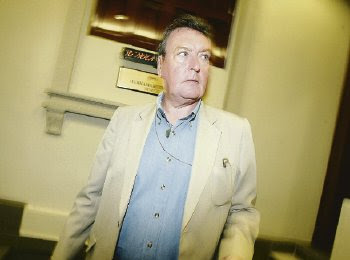 Some Ray Of Hope?

KUALA LUMPUR: A British private investigator has been roped in to help the Royal Commission of Inquiry into Teoh Beng Hock's death.

Michael Leslie Squires, a former Hong Kong Independent Commission Against Corruption (ICAC) chief investigator, has been tasked to investigate Teoh's death and whether proper interrogation procedures were followed.Commission secretary Datuk Saripuddin Kasim said for the purpose of investigation, Squires, 58, would "have the powers given to police officers in any seizable case, will be authorised to search any premises and take possession of any articles or documents related to the matter being investigated".

Squires, who has 30 years' experience in enforcement, sat in the inquiry yesterday afternoon dressed in a cream suit and blue shirt. With the help of a court interpreter, he was also allowed to peruse documents which were produced in the inquiry.Born in Liverpool on June 28, 1952, Squires' career began in 1971 when he joined the British police force. Three years later, he served as a detective constable in the Criminal Investigation Department in Liverpool, and was subsequently promoted to detective sergeant and was engaged in drug investigations at national and international levels.

Five years later, Squires retired from ICAC and became a consultant with investigating agencies.
He has received various commendations from the Chief Executive of Hong Kong, Commissioner of ICAC, director of the United States Secret Service and director of the US Customs Service. Earlier, Saripuddin said British forensic pathologist, Dr Peter Vanezis, had agreed to testify in the inquiry and the commission would be making arrangements for his attendance.Dr Vanezis, who was appointed by the Malaysian Anti-Corruption Commission to testify in the inquest, had previously ruled out murder in Teoh's death.
Posted by Joshua Lopez at 10:13 AM