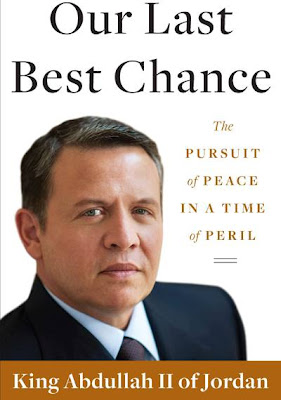 AMMAN (JT) –– His Majesty King Abdullah’s book titled “Our Last Best Chance: The Pursuit of Peace in a Time of Peril”, will be published today in English by Viking.
In the book, which will be published in eight languages, including Arabic, King Abdullah tackles challenges in the Middle East and the urgent need to move forward on the path of political, social and economic reform.
The King also reviews efforts to bring about Arab-Israeli peace, Jordan News Agency, Petra, reported.
The Monarch, who completed his book in September, also speaks of his vision for reform he adopted since his accession to the Throne to best serve the interests of Jordan and Jordanians. He points out that the reform process was stalled as a result of resistance by certain forces that hold on to the status quo to guard their interests.
In his book, King Abdullah also warns against narrowing the opportunity of peace due to Israeli intransigence, stressing that the Middle East will not enjoy security and stability unless the Palestinians gain their rights to freedom and independence within a comprehensive regional context.
The King indicates in the book that Israel must choose between remaining fortress Israel in a region and being racked by conflicts and living in peace that ensures security and stability for the entire region.
Dar Al Saqi, a Lebanese publishing house which was granted the copyright in Arabic, has allowed the London-based Asharq Al Awsat Arabic daily and local newspapers to publish some chapters of the book starting today.
Posted by Joshua Lopez at 6:56 PM