US Military Ready For Libya 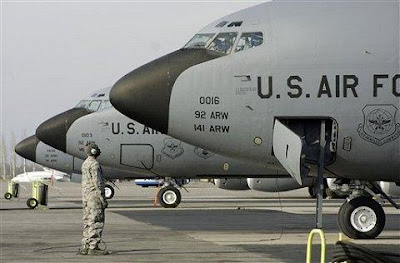 The U.S. military is moving air and naval forces in the region around Libya to be ready to carry out any orders it is given related to the crisis there. But officials say no decision has been made on whether or how to use U.S. military power. The U.S. military normally maintains a strong presence in the Mediterranean, and has bases in Spain, Italy and Turkey. It has more forces south of the Suez Canal, mainly focused on East African piracy and support for U.S. forces in Afghanistan. But naval and air forces in particular are flexible, and can be in one place one day, and another place fairly far away the next day.
Pentagon spokesman Colonel David Lapan says although the U.S. military has not been ordered to do anything regarding Libya, it is making plans and has started to move forces, just in case it is ordered."We have planners working various contingency plans, and I think it's safe to say as part of this we are repositioning forces to provide for that flexibility, once decisions are made," he said.
Lapan says the military is working to ensure that when President Barack Obama says he has asked officials to prepare "a full range of options," as he did last week, that there are in fact options researched and ready to be presented to the president, and implemented if necessary.Military officials are reluctant to say exactly what options they are preparing. But experts outside government say the possibilities include imposing a no-fly zone, delivering humanitarian supplies or weapons to revolt leaders, evacuating foreigners, and potentially sending in troops to establish or maintain order.
No one is seriously talking about that at this stage.Colonel Lapan would only say the forces "could be used in any number of ways," and that moving them now provides additional flexibility to the president. "We have lots of planners looking at options and contingencies to provide the senior leadership with options, but no decisions have been made yet. So, we’re still in that planning and preparing mode should we be called upon to do any of those types of missions, whether humanitarian or otherwise," he said.
Lapan says the planning is focused mainly on naval and air forces, and that so far no orders have been received to launch any type of military mission in or around Libya. - voanews
Posted by Joshua Lopez at 9:23 AM