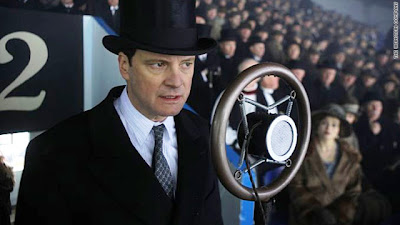 Los Angeles (CNN) -- The story of a king overcoming a speech impediment to lead his people through World War II took top honors at the 83rd Annual Academy Awards.
"The King's Speech" won the best picture, best actor, best director and best original screenplay Oscars at Hollywood's Kodak Theatre Sunday night.
The saga of how a college student created Facebook, which is now credited with helping citizens overthrow their leader in the Mideast, lost out on the big awards, but "The Social Network" did win Oscars for best musical score, film editing and best adapted screenplay.
Natalie Portman, who played a ballet dancer in "Black Swan," was given the best actress academy Award. Portman also won Golden Globe and SAG best actor trophies in recent weeks. Portman, who is pregnant, was asked backstage if she might now consider "Oscar" as a name for her child.
"I think that's probably definitely out of the question," she said. When "King's Speech" director Tom Hooper accepted the best director Oscar, he noted that it was his mother who found the script for him. "The moral of this story is listen to your mother," Hooper said. "King's Speech" writer David Seidler pointed out that at 73, he was the oldest person to ever win best original screenplay.
"My father always said to me I would be a late bloomer," Seidler said, noting that at 73 he is the oldest winner ever in the category. "I hope that record is broken quickly and often." Colin Firth, who portrayed the stuttering King George VI in "The King's Speech," completed his sweep of best actor honors with the Oscar win."I have a feeling my career has just peaked," said Firth, who also won a Golden Globe and the SAG award.
Firth was asked backstage what he would now do since the hectic film award season has ended.
Posted by Joshua Lopez at 4:50 PM