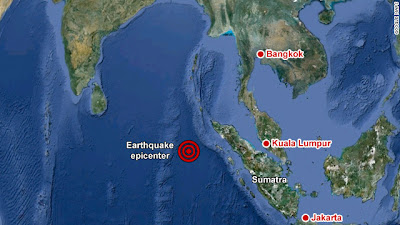 (CNN) -- A massive earthquake struck off the coast of the Indonesian island of Sumatra on Wednesday, triggering a tsunami alert for the Indian Ocean.
The quake struck about 430 kilometers from Banda Aceh, the capital of Indonesia's Aceh province, and had a magnitude of 8.9, the U.S. Geological Survey said. It took place at a depth of 33 kilometers.
The Pacific Tsunami Warning Center said it had issued a tsunami watch for the entire Indian Ocean, and the Indonesian Meteorology, Climatology and Geophysics Agency said it had put up a tsunami warning.
The power has gone out in Banda Aceh and residents are moving to higher ground, said Sutopo Purwo Nugroho, a spokesman for the Indonesian National Disaster Management Agency.
The extent of the damage is still being assessed.
In 2004, a 9.1-magnitude underwater earthquake struck off the coast of Sumatra, triggering a tsunami that killed more than 200,000 people in 14 countries. Aceh was one of the worse affected areas.
The tsunami, which washed away entire communities, caused nearly $10 billion in damage and more casualties than any other tsunami in history, according to the United Nations.
Indonesia is on the so-called Ring of Fire, an arc of fault lines circling the Pacific Basin that is prone to frequent earthquakes and volcanic eruptions.
Posted by Joshua Lopez at 5:49 PM