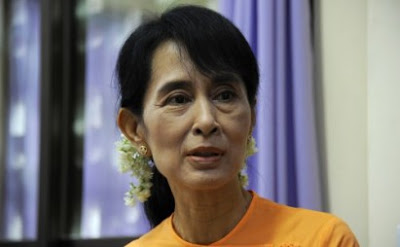 YANGON - Aung San Suu Kyi, chairperson of the National League for Democracy (NLD), has won Myanmar's parliamentary by-elections and her party's other candidates also swept almost all parliamentary seats, announced the NLD headquarters Sunday night.
Waving the party's flags, tens of thousands of people gathered in front of the NLD headquarters cheering and hailing Suu Kyi and her party's election victory.
Suu Kyi won 1955-145 against U Soe Min, candidates of the Union Solidarity and Development Party (USDP) in Yangon region's Kawhmu township constituency, securing a seat of House of Representatives there.
According to the results released so far, NLD candidates have won the by-elections in a total of 27 constituencies out of 45, of which all are in Yangon region's six constituencies -- Mayangon, Mingala Taungnyunt, Hlegu, Thongwa and Dagon Seikkan and in 21 other township constituencies in other regions or states including the four constituencies in Nay Pyi Taw mostly for the seats of House of Representatives. More results are expected to follow.
The result was available hours after the polling was closed in the afternoon at 4 p.m. (9:30 GMT), followed by counting of votes in the presence of polling station officers, candidates' election agents and 10 witnesses from the public.
The parliamentary by-elections in Myanmar, which began on Sunday morning, were contested by a total of 157 candidates -- 150 represent 17 political parties and seven independents -- for the 45 vacant seats of parliamentary representatives scattered in 45 township constituencies in nine regions or states -- Yangon, Mandalay, Ayeyawaddy, Sagaing, Tanintharyi, Bago, Magway, Mon and Shan as well as Nay Pyi Taw directly under the president's administration.
Of a total of 6.4 million eligible voters in 45 constituencies, over 1 million cast votes in Yangon region's six township constituencies.

The by-elections were observed by foreign diplomats and United Nations officials based in Myanmar as well as over 150 invited international observers and media personnel from ASEAN and its dialogue partners, including the European Union and the United States.