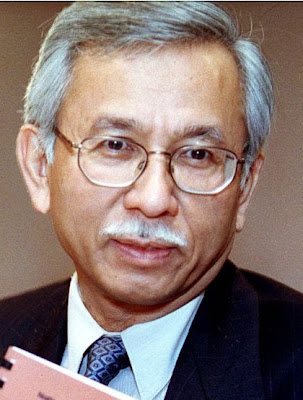 "Reclaiming two-thirds majority is a good vision but (Najib) should be more practical... if, unfortunately, he loses more seats, Umno will oust him. This is politics," said the Umno veteran. In an exclusive interview with Chinese newspaper Sin Chew Daily , Daim explained that removing a political leader who fails to win an election is a global trend, and not just confined to Umno.

If the country's economic performance is strong, and Umno is united as a team, Najib will have the upper hand in fighting the next general election, he said.

"But this does not mean Najib can win for sure. Just like a tennis game, you still need to play hard to win. Even if you have the upper hand, you cannot afford to make a mistake. Any mistake will cost you the game."

Should Najib step down from Umno presidency, Daim said, the successor would probably be determined by Umno through a party election.

Although conventionally the deputy president will be the next president, there could be other leaders in the challenge for the presidency this time, since everyone aspires to be the prime minister, he said.

However, Daim gave Najib the thumbs up as a better prime minister compared with his predecessors because he listened to the people, which was evident in his commitment to abolish the Internal Security Act and fight corruption.

As a close colleague of former prime minister Dr Mahathir Mohamad, Daim was Umno treasurer from 1984 to 2001.

One year before the 2008 general election, Daim warned that BN would lose Penang, Selangor and Kedah and the 'Daim's prophecy' came true when BN was hit by the 'political tsunami' on March 8, 2008.

For the coming election, Daim expects Penang and Kelantan to remain as Pakatan Rakyat's strongholds.

He said BN still has chances in Kedah and Selangor, on the condition that Umno stays united and is able to find formidable candidates to take over as menteri besar.

It will be an uphill battle for BN to defend Perak, said Daim, because the anti-establishment sentiment among the voters after its controversial re-taking of the state was still strong.
For Kelantan, as long as PAS spritual leader Nik Abdul Aziz Nik Mat is still the menteri besar, Daim is of the view that BN can say goodbye to the state.

He also shared his 'recipe' with Najib for winning the next general election "If I were the prime minister, I will focus on Sabah and Sarawak to maintain the status quo there, together with the incumbent seats here (the peninsula). I will also pay more attention to marginal seats lost in the last election.

"After all, if you travel everywhere, you are also not sure where can get your votes, so you will be just wasting your time."

Timing is also an essential factor that can significantly increase Najib's chances of producing a better electoral result.

"Election is like a chess game, it is a competition. If I were the prime minister, I will know how to play this election game. I think Mahathir also knows," Daim added.

http://my.news.yahoo.com/daim-najib-fails-win-more-seats-070049010.html;_ylt=AjmS_aN.mHGtXmqtlPm8SRBAV8d_;_ylu=X3oDMTRuYmh1aDhnBGNjb2RlA3ZzaGFyZWFnMgRtaXQDQ29rZSBNYWxheXNpYSBTdG9yaWVzBHBrZwMxMjIwYmI0ZC0zZmNiLTM5YjktOTIzNy1lYTUyMDNjNWZkMTcEcG9zAzMEc2VjA01lZGlhRmVhdHVyZWRMaXN0BHZlcgNlOGFjNDllMC02ZTgwLTExZTEtYTVjYS00NDI2Njk0NDczZTM-;_ylg=X3oDMTMxazZsM2Q3BGludGwDbXkEbGFuZwNlbi1teQRwc3RhaWQDZmFlNjIyODktNDQ4ZS0zNjMzLTk1YWYtZTZiYTY5OWJkOWNhBHBzdGNhdANtYWxheXNpYQRwdANzdG9yeXBhZ2UEdGVzdAM-;_ylv=3
Posted by Joshua Lopez at 11:14 AM