Rafidah Aziz: GE 13 Is About A Desired Government, Not Personalities. 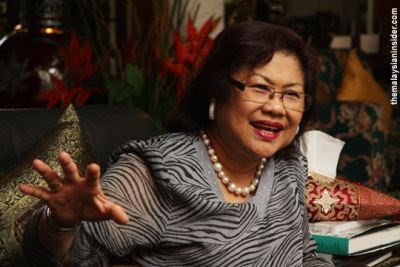 KUALA LUMPUR, March 28 — The voters’ desired government and not political personalities will determine the outcome of the next general election, Tan Sri Rafidah Aziz said last night.
The veteran Umno politician said party members needed to focus on their own parties and work hard at grassroots level. This would translate into votes.

“Elections are not about individuals,” she said at a gathering with the media and the public here last night. “It is not about (Datuk Seri ) Shahrizat (Abdul Jalil) or (Datuk Seri) Anwar (Ibrahim).
“What we want decided is (our) government... individuals do not matter to me. We should focus on the party (Umno)… every individual is indispensable,” the former Wanita Umno chief said.
She was asked if the National Feedlot Centre (NFC) scandal involving Wanita Umno chief Shahrizat would affect public perception of Umno.

Rafidah, who is former Minister of International Trade and Industry, said politicians from both sides of the political divide should minimise attacking each other and instead work towards better serving their constituents.

“I would rather have a politician (who) is not so noisy in Parliament (who) does the job of taking care of his constituency rather than those who are good at making speeches,” she said.

Rafidah also said she would not contest in the next general election, and that she was ready to pass the baton to deserving candidates.

“It’s time... in 2008 if I knew I was not going to be in the Cabinet, I would not accept... but (ultimately) it’s the prime minister’s decision,” said the Kuala Kangsar MP.

BN faced its worst electoral result in the 2008 general election, when it lost five states to Pakatan Rakyat as well as its two-thirds supermajority in Parliament.

Prime Minister Datuk Seri Najib Razak has indicated he will soon call general elections, confident in of the surge of late in public perception of Barisan Nasional (BN).

Umno-controlled Berita Harian reported the prime minister as saying in Port Dickson on March 24 that “rasa-rasa bunyi (PRU) dah dekat [feel the sounds (of elections) are near]”.
Najib, who is Umno president, said last week he would dissolve Parliament when public confidence towards his administration was at its highest level.

Observers say Najib took over in April 2009 ostensibly to improve on the ruling coalition’s performance with only a return to two-thirds majority able to guarantee he remains in power.

http://my.news.yahoo.com/desired-government-not-personalities-will-decide-polls-result-000901515.html
Posted by Joshua Lopez at 10:46 AM