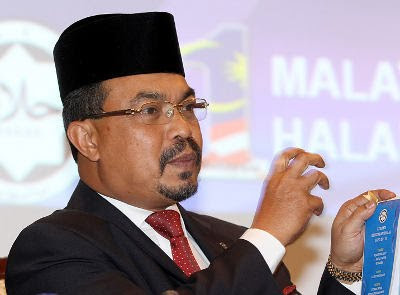 He Conveniently Forgets That UMNO has the lowest Morals In The History Of Malaysian Politics. These are the Kind Of Fools That Malaysia has as Cabinet Ministers! The Threats they create are threats never seen or heard in any other Muslim country.

KUALA LUMPUR, March 29 — A federal minister today defended a controversial seminar on “the threat of Christianisation”, saying that it was needed to safeguard the interests of Muslims.

“The seminar is to safeguard the interests of Muslims, it is within the purview and jurisdiction of each state.

“We have to take care, take into consideration the interests of Muslims,” he told reporters here.
“The seminar is not meant to hurt anyone’s feelings,” Jamil said when asked to comment on the huge public outcry over the seminar, especially among non-Muslim and Christian groups.

The seminar, with the theme “Pemantapan Aqidah, Bahaya Liberalisme dan Pluralism Serta Ancaman Kristianisasi Terhadap Umat Islam. Apa Peranan Guru?” (Strengthening the Faith, the Dangers of Liberalism and Pluralism and the Threat of Christianity towards Muslims. What is the Role of Teachers?), requires the attendance of two religious teachers from each of the 55 national schools across Johor.

The Johor Mufti and Education departments have come under fire for endorsing the unproven claim that Christians are threatening the Islamic faith.

Asked if the title of the seminar was inappropriate, Jamil (picture) said: “I don’t know. You have to ask the agency involved. “I haven’t seen the title myself.” The Johor Mufti Department has said its seminar on Saturday is to ensure young Muslims are not influenced by “the threat of Christianisation.”

The officer in charge of the seminar told The Malaysian Insider yesterday the department was jointly organising the seminar with the state education authorities because they “fear young Muslims will be confused and not understand” when faced with attempts to convert them.
“Even if there is no threat, we must be careful so that the faith of Muslims will not be influenced,” the official, who declined to be named, said when asked if he had proof of proselytising by Christians.

Chrisanne Chin, Council of Churches of Malaysia (CCM) Youth Moderator, was shocked and in disbelief, saying yesterday “why is there a perceived threat? Do they have to create this sense of fear?”

Chin, who is also an executive council member of CCM, stressed that while she was not against religious teacher training programmes, one such as this would put pressure on the teachers to spread religious tension and fear among unsuspecting pupils.

He added that while “it is fine to improve your faith”, such seminars “will cause the [non-Muslim] community to feel uncomfortable.”

Azman also said in a text message that he has informed the federal government’s “education director-general for immediate action.”

But the Malaysian Ulama Association (PUM) and Malay rights organisation Perkasa supported the seminar as necessary, insisting that the threat is real.

The Johor Mufti Department officer also said that as part of their responsibilities to Muslims, similar seminars have been held to “educate (Muslim) youths and rural folks so there would be no misconception when these issues arise.”

Christians form 9.2 per cent of Malaysia’s 28.3 million-strong population. In recent years, the Christian and Muslim religious communities have been engaged in a tug-of-war over the word “Allah”, with the latter group arguing that its use should be exclusive to them on the grounds that Islam is monotheistic and the word “Allah” denotes the Muslim God.

Christians, however, have argued that “Allah” is an Arabic word that has been used by those of other religious beliefs, including the Jews, in reference to God in many other parts of the world, notably in Arab nations and Indonesia.

A number of conservative Muslim groups have also accused Christians of attempting to convert Malays, resulting in heightened tension between followers of the two religions.