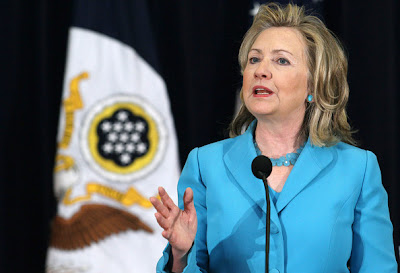 It would materialise very well, My Salutations To Madame Hillary Clinton!

Secretary of State Hillary Clinton began landmark talks Thursday with Myanmar's new leadership on the first top-level US visit to the military-dominated nation in half a century.
Clinton met Foreign Minister Wunna Maung Lwin in the remote capital Naypyidaw, according to an AFP reporter, ahead of scheduled talks with President Thein Sein, a former general who heads the new regime.
The top US diplomat and her aides were ushered into the foreign ministry building in the remote city, where Myanmar's generals abruptly moved their capital in 2005, and sat facing their counterparts under pictures of pagodas.
Her trip comes amid signs of change in Myanmar, which was ruled by the military until elections last year brought a nominally civilian government to power -- albeit one with close links to the army.
US officials have said Clinton will raise concerns about suspected military links with North Korea during her talks with the foreign minister, although they see no signs of a major nuclear drive in Myanmar.
Later Thursday Clinton will head to Yangon, the commercial hub of the country formerly known as Burma, where she will meet opposition leader Aung San Suu Kyi, who is widely respected in the United States.