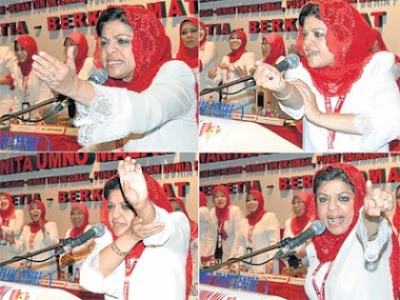 Shahrizat has really disappointed and frustrated me because i've been her supporter for years but i find it rather appalling that this Lawyer fails to understand Ministerial Responsibility & Accountability.

Yes, maybe you are not involve but your husband is and he has used your position, Hence You Must Be Made Accountable! This is The People's Money, Not Your Inheritance!

KUALA LUMPUR, Nov 30 — Wanita PKR said today it was shameful for Datuk Seri Shahrizat Abdul Jalil to equate Datuk Seri Anwar Ibrahim’s sodomy trial with allegations of the abuse of over RM250 million in public funds in the National Feedlot Centre (NFC) scandal.
Shahrizat had said this morning that PKR president Datuk Seri Dr Wan Azizah Wan Ismail should also resign after the opposition party had called for the Wanita Umno chief to quit politics as the national cattle farming project was awarded to her husband.
“It is shameful and reflects the typical Wanita Umno mentality. This is the wrong analogy — sodomy and the abuse of public funds.
“She really deserves the title of cow minister of the year,” women’s wing chief Zuraida Kamaruddin told a press conference today.
The Ampang MP has repeatedly called upon women, family and community development minister Shahrizat to resign as the NFC is being investigated for cheating and criminal breach of trust over its purchase of two luxury condominium units here with government funds.
NFC executive chairman Datuk Seri Dr Mohamad Salleh Ismail is Shahrizat’s husband. But Shahrizat said today, “I have nothing to do with it (the fiasco), why ask me to resign?”
“Today, I challenge all (PKR Wanita members) to call for Wan Azizah’s resignation because of her husband (PKR de facto leader Datuk Seri Anwar Ibrahim), who has been punished and charged for offences that cannot even leave my lips,” she said.
The Cabinet minister has been under pressure from both opposition and Barisan Nasional (BN) MPs to quit the Cabinet after a host of allegations emerged in recent weeks about improprieties involving the NFC, a national cattle project managed by her family.
Among the issues that have been raised by PKR are the use of public funds to acquire luxury condominiums worth RM13.8 million and the possible use of company money as personal expenditure by the minister’s family.
Zuraida also added today that although Wanita Umno delegates had defended their leader, “the real judge is the public who will vote soon.” “Now they will judge not just the Wanita Umno chief but all parties in Barisan Nasional,” she said.
Posted by Joshua Lopez at 9:54 AM