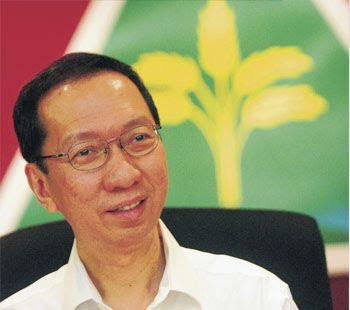 Tan Sri has announced his departure from Contesting in the upcoming General Elections, which usually would mean that he is resigning as President of Gerakan & Retiring from politics. However, he could continue as a Federal Cabinet Minister via his current Senatorship and he is only at his first term.


KUALA LUMPUR, Nov 17 — Gerakan president Tan Sri Dr Koh Tsu Koon announced today he will refrain from contesting in the 13th general election, ending the guessing game over the “ultimate sacrifice” he had promised party delegates last month.
The Penang Barisan Nasional (BN) chief told a special press conference summoned here that the move was a “personal decision”, saying he had already informed Prime Minister Datuk Seri Najib Razak.
He said his decision is the first step in the party’s renewal and transformation agenda titled “Gerak Bersama Rakyat” (move with the people) aimed at readying Gerakan for the coming polls.
“I myself will lead by example and take the first step for renewal.
“I have decided not to participate as a candidate in any seat, Parliament or state, in the upcoming 13th general election,” he said.
Posted by Joshua Lopez at 12:02 PM