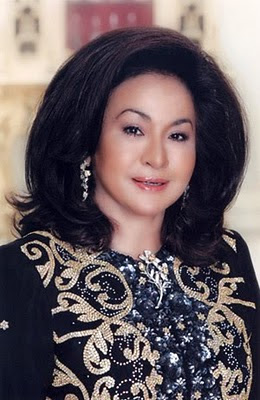 Many Malaysians today have turned rather childish and petty! Stop The Attacks On Datin Paduka Seri Rosmah Mansor NOW!!! She has not done any harm to any Malaysian, She lives her own life and does her own charitable work with utmost passion.

She has every right to accept gifts, whether it's a dollar or Millions of dollars it's a right to receive or reject. Some Malaysians really need to grow up! Stop this cruel attacks on her! keep your politics and religion out from Rosmah's life for God's sake. Bunch Of Draconian Bigots trying to hijack this country in the name of Islam & Politics! Don't You Bigots have anything better to do?!

IPOH: The state MCA Youth has lodged a police report against DAP's "Superman" Professor Hew Kuan Yau for allegedly hitting out at MCA leaders and the prime minister's wife, Datin Seri Rosmah Mansor, at a ceramah.

The movement's secretary, Khoo Boon Chuan, was accompanied by 20 members when he made the report at the district police headquarters yesterday.Hew, who is national DAP election preparation and publicity chief, earned the nickname "Superman" for wearing a T-shirt featuring the superhero whenever he speaks at a ceramah.

"He should stop attacking MCA and other party leaders. We have given a compact disc which contained his defamatory speech against at least seven MCA leaders and Datin Seri Rosmah Mansor to the police.

"We have proof of his slanderous remarks made at the ceramah," he said, adding that the talk was held in conjunction with DAP's 45th anniversary on Oct 13.Present was MCA Public Services and Complaints bureau chairman Datuk Michael Chong.