'Gay' penguins to be separated at Toronto Zoo 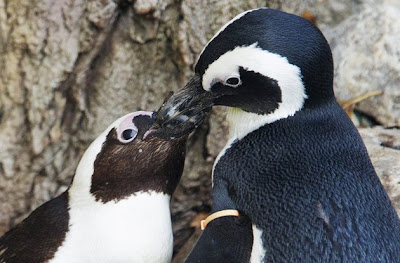 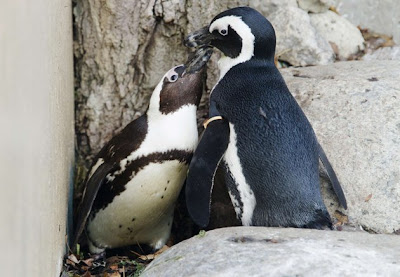 Well, You can pair them up with Females, two possibilities, death due to heart ache & no off springs, the female would be untouched sexually. Why separate them? Haven't you heard of artificial insemination?
Buddy, 21, and Pedro, 10, lived in a zoo in Toledo, Ohio, before traveling to Canada to become part of the Toronto Zoo’s first African penguin exhibit in 18 years. The amorous connection between two inseparable male penguins will soon come to an end when the Toronto Zoo pairs them with females.

African penguins Pedro (R) and Buddy interact with each other at the Toronto Zoo in Toronto November 8, 2011. The Toronto Zoo announced they will separate the penguins after zookeepers noticed behaviour denoting a gay relationship between the two, and pair them with females to help preserve the endangered species. Pedro and Buddy will be reunited after mating with other female penguins. REUTERS/Mark Blinch (CANADA - Tags: ANIMALS SOCIETY)