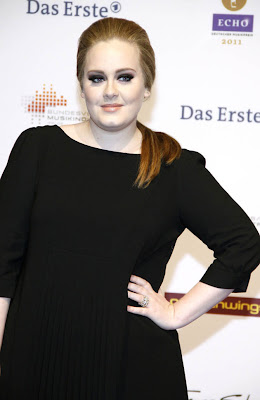 We were a bit disturbed by the rumours flying around this morning that Adele has throat cancer. Twitter has ignited with claims that her illness is much more serious than we first thought, with #prayforadele trending. However, a spokesman for the singer has confirmed the rumours are not true. Phew.

The 'Someone Like You' singer announced on Friday that she's been forced to cancel all her remaining tour dates to undergo throat surgery, after being diagnosed with a vocal chord hemorrhage.
However, fans on Twitter suggested that the situation was more serious, with 'Adele has throat cancer' both trending over the weekend.
Adele's spokesman has now intervened, saying: "We would like to reiterate that Adele is to undergo surgery for a hemorrhaged vocal chord. All reports regarding any other condition are 100% false."
Phew. We're keeping our fingers crossed that Adele will be back to her fabulous self in no time.