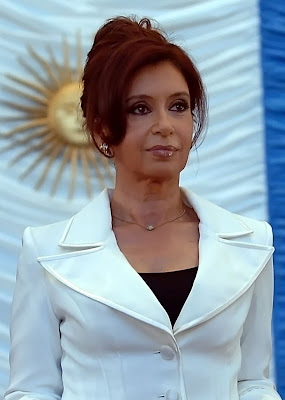 BUENOS AIRES (Reuters) - Argentina's center-leftist president, Cristina Fernandez, won a landslide re-election victory on Sunday as voters credited her unconventional policies for a long economic boom.
The result marks a dramatic change of fortunes for a leader who some critics once said might have to leave power early as angry protests by farmers and middle-class voters battered her approval ratings soon after she took office.
With votes in from 96 percent of polling stations, Fernandez had almost 54 percent of the vote with a massive lead of 36 percentage points over her nearest rival, socialist candidate Hermes Binner.
No Argentine leader has won such a big share of the vote since General Juan Domingo Peron was elected for the third time with 62 percent in 1973.
"If any one of us had said this was possible two years ago, they would have told us we were crazy," a tearful Fernandez, 58, told thousands of supporters who packed the downtown square that lies before the pink presidential place in Buenos Aires.
"There's a lot left to do, but if anyone had seen this country before 2003, they'd realize how much progress we've made," Fernandez said in a speech laden with references to her late husband and presidential predecessor, Nestor Kirchner, who governed from 2003 to 2007.

When Kirchner died of a heart attack a year ago, many thought it spelled the end of the couple's idiosyncratic blend of state intervention, hefty welfare spending, nationalist rhetoric and the championing of human rights.
Instead, it prompted an outpouring of sympathy for a woman who suddenly seemed more likable and recognition of Kirchner's role in helping the country back on its feet after a sharp economic crisis in 2001/02 that plunged millions into poverty and culminated in the biggest debt default in history.
WIDOWHOOD
Despite double-digit inflation and other signs of strain as global conditions worsen, Argentina's economy is growing at about 8 percent a year and the country has regained some of its glory as the "breadbasket of the world" as grains shipments rise. Unemployment is at a 20-year low.
A splintered opposition and voter confidence over the health of the economy helped Fernandez turn the sympathy vote over her widow status into solid electoral support.
Two years ago, voters punished her confrontational handling of the farm conflict by voting in opposition lawmakers in a mid-term election, but analysts said Sunday's results would help her regain a narrow working majority in Congress.
"They've done good things and bad things ... but what matters is that for the first time there's a plan for the country that involves all Argentines of all classes," said Malena Juanatey, 25, a film director, who joined thousands of supporters in downtown Buenos Aires.

But Fernandez's easy re-election belies fierce opposition to her combative, heavy-handed style -- typical of the Peronist party that has dominated Argentine politics for decades.

A recent crackdown on economists whose inflation estimates double the official rate of a discredited state statistics agency is typical of Fernandez's controversial methods, who some critics say resemble those of Venezuela's Hugo Chavez.
Businesses are routinely strong-armed into price control agreements -- her main weapon against surging prices -- and deals to increase their exports as the trade surplus dwindles.
In 2008, at the height of the global financial crisis, Fernandez stunned financial markets by nationalizing private pensions. A year later, she fired the head of the central bank when he refused to hand over foreign reserves to pay debt.
Such measures, coupled with high inflation and lax monetary and fiscal policy are viewed dimly on Wall Street, where economists say Latin America's third-biggest economy could be heading for a hard landing as global conditions sour.
Fernandez has outlined few concrete policy proposals, vowing only to "deepen the model."
Few analysts think she will change course unless forced to by a slowdown in neighboring Brazil or lower prices for Argentina's soy exports. Regaining a working majority in Congress could strengthen her hand.
"We expect the current policy direction to be broadly maintained," said Alberto Ramos, chief economist at Goldman Sachs. "Control of Congress will lead to a significant concentration of power and gives the government legislative backing for some of its most interventionist policies."