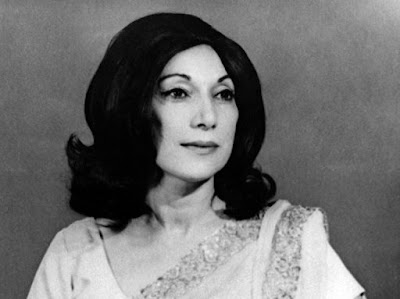 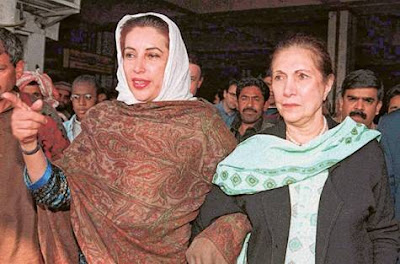 Passing of a True Legend, May Her Soul Rest In Peace In The Kingdom Of Heaven & May Mercy & Justice from God Most High Reign Over Pakistan, Amen.

(BBC) Pakistan's former first lady Begum Nusrat Bhutto has died in Dubai after a long illness. She was 82. She was the widow of the former Pakistani Prime Minister and President Zulfikar Ali Bhutto, and the mother of Benazir Bhutto, who was assassinated four years ago.
Nusrat Bhutto was herself elected twice to the Pakistani parliament. She led the Pakistan People's Party (PPP) until her daughter took over in the mid-1980s. Her husband, Zulfikar Ali Bhutto, was the founder of the PPP, which controls the government in Pakistan today.
He was prime minister and president in the 1970s.
Nusrat Bhutto led the PPP for several years after her husband was hanged in 1979, during the military rule of Gen Zia-ul-Haq.
Her daughter, Benazir, later took over as head of the PPP and served twice as prime minister.
Benazir Bhutto was assassinated in 2007, shortly after returning to the country to participate in elections following years of exile. Her husband, Asif Ali Zardari, is now Pakistan's president.
Nusrat Bhutto will be buried in the family's mausoleum in southern Sindh province, a PPP spokesman said.

Bhutto, legacy to live
Geraldine Panapasa
Sunday, October 09, 2011
WHEN you think of places like Pakistan and the Middle-East, turmoil and chaos automatically describes everyday life. Economic upheaval, constant fighting for freedom of the common man and political changes that undermine power and success of those in the upper echelons continue to plague these countries and many more around the world.
I had a refreshing moment of history when I came across the movie Bhutto. The powerful image of a Pakistani woman who had etched her name in the country's history books appeared on the DVD menu. That look of freedom and patriotism to a country she called home seemed almost inspirational.
Her name was vaguely unfamiliar. I had heard the name before but I didn't realise how powerful her name was to the people of Pakistan, to rights and freedom fighters, to women and feminism, to equality and democracy - until her biography documentary came out in 2010.
Directed by Duane Baughman and written by Johnny O'Hara, the film explores the life of the eldest daughter of Pakistan's former Prime Minister and President Zulfikar Ali Bhutto and Nusrat Bhutto. It portrayed Benazir's early life with her learned father, following in his stride to establish major social, economic and political changes.
Although the documentary did its best to highlight as much as possible the challenges of being the first woman elected to lead a Muslim state while carrying on her own ideologies of positive change for Pakistan, it touched on the strains of politics on her personal life - eventually, one that led to her assassination on December 27, 2007 after leaving Pakistan People's Party's last rally in Rawalpindi.
According to the UN News Centre, Benazir was named one of seven recipients of the UN Prize in the field of human rights the following year. The polarising figure and Dorothy Stang of the Sisters of Notre Dame de Namur were posthumously honoured.
History has always been a keen interest and it wasn't until I watched Bhutto that I realised the consequences and challenges of fighting for democracy and human rights. Trying to make a difference is always met with some kind of opposition.
The movie captures different views of Benazir's reign from her husband and present Pakistani head Asif Ali Zardari to former US Secretary of State Condoleezza Rice and British Pakistani historian/commentator Tariq Ali.
While her death meant many things for the future of Pakistan, her legacy continues to live on despite negative instances that proved to be a setback for her political career.
http://www.fijitimes.com/story.aspx?id=182780
Power marred by tragedy: Kennedys, Gandhis and Bhuttos
http://blogs.tribune.com.pk/story/8563/power-marred-by-tragedy-kennedys-gandhis-and-bhuttos/
Posted by Joshua Lopez at 10:54 AM